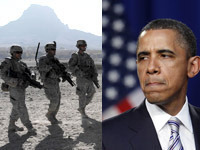 The fate of the START-3 treaty is open to question. During the meeting in Sochi, Russia and NATO failed to coordinate the question regarding the missile defense system in Europe. The meeting in Russia's resort city virtually ended with no results.

The only "achievement" was Anders Fogh Rasmussen's "promotion" as a Cossack. NATO Secretary General received a special Cossack cup during the ceremony. However, the gift did not change his views during negotiations. NATO officials were given a tour of the city, in which they could take a look at Olympic objects that are currently being built in the city for the Winter Games in 2014. The point of the excursion - make sports, not war - has not produced any effect either.

As a result, the sides agreed to negotiate the missile defense issue further. The next discussion will take place within the scope of the NATO summit in Chicago - in May 2012.

The problem seems to be very serious indeed. The Russian side tried to set forth an ultimatum to NATO. If the alliance does not come to an agreement with Russia about the missile defense system in the next eleven months, Russia will accelerate the establishment of the air and space defense system. The country will also increase the tactical missile group on its Western borders, Russian officials said. To crown it all, Russia may even pull out from the START-3 Treaty.

Russia's Ambassador to NATO Dmitry Rogozin claimed that the alliance artificially hampers the talks about the missile plan, even though Moscow made two suggestions to Brussels on the matter. Russia offered to create the joint European missile defense system on the base of the sectoral principle and to integrate two missile defense systems into one.

The alliance rejected both suggestion, though. In return, NATO offered information exchange and a so-called virtual center on operational matters, the point of which NATO officials do not understand very well themselves.

The meeting in Sochi was preceded with a a number of unpleasant events. In the middle of June, the USA and Ukraine conducted joint military drills near Russia's major naval base on the Black Sea coast. USS Monterey, equipped with AEGIS missile defense system took part in the drills. The Americans thus demonstrated a threat in Russia's strategically important regions. In addition, Washington announced a full-scale modernization of its nuclear arsenal, including the air bombs currently stored at NATO bases in Europe.

Brussels is sounding out opportunities to resume the talks regarding the Conventional Armed Forces in Europe Treaty. The alliance reportedly intends to include Abkhazia and South Ossetia in the treaty. In this case, Russia will be restricted in keeping its peacemaking contingent there.

There is another interesting aspect here. Russia and NATO say that the situation in Libya must be solved with the use of peaceful methods. However, NATO continues to bomb the country and objects to Russia's concerns about the violation of the resolution from 1973.

Konstantin Sivkov, the first vice-president of the Academy of Geopolitical Problems, said in an interview with Pravda.Ru that NATO was fully aware of Russia's weakness.

"They realize that Russia is weak. That's why they are being impudent with us. The only option to make the West think and delay its intention to build the missile defense system against Russia is a threat to pull out from the Strategic Arms Reduction Treaty.

"The Americans and their allies want to deprive us of our advantage - the missile and nuclear shield. They want Russia to do it herself, but the USA is determined to actively develop the ground, sea, air and space elements of the missile defense system. If Russia abides by the terms of the START-3 Treaty, the balance of forces can change considerably during the upcoming ten or 15 years.

"The Russian defense complex has been declining during the recent 20 years. As a result, it is a big problem now for the country to produce one division of S-400 systems a year, whereas tens of such divisions are needed. For example, we need not less than 200 Iskander missile complexes along our western borders to show an adequate response to NATO's challenges. It would take Russia decades to make them if nothing changes for the better," the expert said.

The START-3 Treaty was originally designed as a document with many shortcomings . The Americans strongly refused to relate the treaty to the issue of the missile defense system. They did not include in the treaty such aspects as cruise missiles, the development of hypersonic weapons and the modernization of the nuclear arsenal.

Nevertheless, there are not many reasons to hope that the West will be frightened with what Russia can do in return. Washington is certain that Moscow is bluffing with its threats.