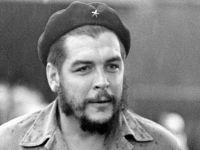 During the last three campaigns he shared with Guevara, Pombo drank deeply of the sap which composes the new man: in the Sierra Maestra, in the Congo and in Bolivia. He said that he understands a "different interest" for the figure of Che in Argentina.

When reassessing the concept of education for the guerrilla that Che spoke about, Harry Villegas Tamayo makes an inevitable comparison with the armies that fought. Basically the instruction means "do not be illiterate," for those who know how to handle a more sophisticated weapon.

During three campaigns, he drank the sap that made up the essence of the new man that he shared with Che Guevara: in the Sierra Maestra, the Congo and Bolivia. Pombo, a nickname by which this 71 year old Cuban is known, moderate and eloquent as most Cubans, he's also a simple Brigadier decorated as a hero of the Revolution. He just made his fourth trip to Argentina and, for half an hour of his intense schedule that he was in Rosario and Buenos Aires, he was received at the ambassador's residence in Página/12 Jorge Lamadrid Mascaro.

What is your impression from this visit which takes part in making a new homage to Che for his birth anniversary?

I am satisfied. I saw in the young Argentine, in the Argentine population in general, a different interest in Che. And not only an intellectual interest, but rather an interest in knowing his work, his life, and that's a stimulus. I had always seen that for you Che was a little distant. But with this opportunity, I saw that he is more Argentinan and you will feel more important, as the universal figure he is.

The history books, the official literature, omits teaching the true size of Che. Several generations were formed without reading a single line or word on him ...

Perhaps these are precisely the reasons and a difference I was noticing as to how to project the image of Che in Argentina. I think that when we speak of him we are talking about the Cuban Revolution and also Belgrano. I saw in this an opportunity, because we had not looked as closely as now, when I went to the Monumento à Bandeira in Rosario. He dreamed of an integrated Latin America, as a great nation. This thought is like Bolivar, in his letter from Jamaica and Marti.

What is your opinion about all the iconography linked to Che, a kind of cult with t-shirts, stickers and photographs that also exists with a business sense?

We don't like it. Now we need to be objective. The world we live in is a purely commercial world, where everything symbolizes commodity, you know? The world is in crisis, climate change and not only economic, but also a moral crisis. It isn't possible to deny or negotiate the marketing of Che. Because there was a moment a while ago that a figure emerged of great strength, mainly in Europe, and thus he began to interest them. You know how fashion is. People follow the fashions of Europeans. I personally think we should put it in its moral magnitude, in its revolutionary magnitude. People ask themselves: And this, who is this? And you wonder about Che. If it leads them to want to know the the inside of Che, we will be winning.

The search for the new man that Guevara was speaking about?

Trying to look for him, yes. I think that perhaps we may not reach the new man, but we must try to find him in indirect form, a different man. A man with more values, more self-esteem, a man who respects a human being for what he is. This we will gradually be able to reach.

Is it possible in the capitalist system to morally stimulate someone to develop that thought? How would it be produced?

The mechanisms of capitalism are different, they seek to create other values, such as work. Fundamentally, with technological development in production systems, increasingly they are inclined to move the man and create the machine. You've seen that in war, which is one of the ways in which new experiments are employed, they are using the robot widely. All the drones are driven the distance without a pilot, and many of them are driven from Washington.

We have to fight a bit harder to create a little more conscience and awareness in people. The fight will be to preserve humanity, to preserve the planet Earth. Something that capitalists do not understand, that the multinationals do not understand, regardless of any hand that nature is giving us, with all these disasters is that there is an absolute deformation of the climate. It would be very complex for them to be able to use the values ​​of Che in the capitalist system.

You said in several reports that Che was more than a guerrilla marksman. What do you mean?

People think that the guerrilla is a marksman, but Che thinks that the guerrilla is not a marksman, but a vehicle of social transformation, who has a strategic objective to achieve: that is the revolutionary power to reform society. So he isn't a marksman and, discarding this concept, considering that in the conditions of Cuba, the first thing was to give the rebel army an education. Because it is not feasible for those who fight in the guerrillas to not have an education, and to be illiterate. There really begins the process of literacy in Cuba. With the soldiers.

Are you aware that in Bolivia Che wrote a page of the epic revolutionary?

All this is circumstantial, all this casuistry is conjectural. Our first objective was to continue the revolution. Why? Because the reasons had not died. Che died, but the reasons why we started this fight had not disappeared. They are there, they are the same. Today in Bolivia there has been a change with Evo, which is an evolutionary formative process, and you have to see how it goes. Advances will be in a positive upward line where the humble classes will participate increasingly in government in a direct way, in process direction, where for the first time in history, native peoples have a representation and it must be said that Bolivia is a multinational country.

How is it possible to understand revolutionary ethics in combat and respect to the enemy that you practiced, if in the civil wars of this time they are bombing all the time or photographing prisoners without shame, naked and defenseless?

Ethics is part of our conception. We were educated not to harm any prisoner, to respect them worthily. We kept the officers close. It gave very good results. We took the soldiers prisoners and we sent to another point we were going to attack. We gave them good treatment as they came before us. And the first thing that they were saying was that we had not even given them a slap. That we had respected them, that we had given them food, that we had healed them. So, this gnawed at the capacity of the soldiers to resist and took from them the fear of becoming prisoners. It was a strategy we applied.

Does a strategy like that in the era of technological warfare dominated by the United States and NATO seem inconceivable?

Actually, we will not go to a technological confrontation with the Americans. We have our planes, our rockets, modernized them and, moreover, we follow what exists in the world. But we do not think of an air war with them because it would be impossible. With the amount of aircraft that we have, we cannot develop a frontal combat against North American Aviation because they would destroy us in three days. So we have to think skillfully. Bite him and then he escapes. How do we apply the principles of irregular warfare to this war, we combine them with the beginnings of modern warfare.

We wouldn't have in the beginning a division of 200 tanks, but we could have five tanks and shoot in an armored car with this little group and in hiding. We must also fight against the modern means of location. Knowledge of where to use the laser and the green screen is fragile. So we have to create green screens. Things of that nature. Or the problem of heat, and heat seeking rockets, how to make false targets so that they shoot and fail, focus on how to create hotspots. In this way it is necessary to use and to take advantage of applying intelligence. No one in the world, not even the Russians - who have an equal technological development - could develop this war front against the might of the Americans.

In 52 years of revolution, could we ever lower our guard?

There is a Marxist principle that says he who forgets defense doesn't survive the war. And another that indicates: a true revolution is worthy when it is able to defend itself. These things are vital to us. We see that we have an enemy up close to us. We know that they will attack us when they think conditions are favorable and we have to be prepared, to think that if in attacking, they will not go out cheaply. And if they put one foot on the ground, they will not be going out.