Russia and Romania get into fight over Hitler's 'deeds' 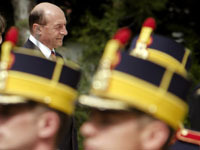 A major diplomatic scandal broke out between Russia and Romania. The reason for the scandal is the statements of Romanian President Traian Basescu, who virtually justified his country's participation in the war against the Soviet Union on the side of Hitler.

Basescu voiced the scandalous statements back on June 22. They were dedicated to the 70th anniversary of the beginning of the Great Patriotic War. On June 22, 1941, the Romanian troops along with the Germans crossed the border into the USSR and later occupied a considerable part of Moldova and Ukraine, including Odessa and Nikolaev. Bessarabia (the main part of Moldavia), Chernivtsi and Odessa regions of Ukraine were made a part of Romania, and a special administrative unit of Transnistria (Zadnestrove) was created on the rest of the occupied territory.

Romanian motivation was partially understandable: until 1940, it was composed of Bessarabia, Chernivtsi and Odessa region of modern Ukraine. The country gave the areas to the USSR under the Molotov-Ribbentrop Pact. The Soviet authorities put pressure on the Romanians, and their ally, Germany did not intervene at the moment. At the same time, Bessarabia and Bucak (south of Odessa region) were captured by the Romanians in 1918, when a civil war was ongoing on the wreckage of the Russian Empire. In Bukovina (Chernivtsi region), the majority of the population always were Ukrainians.

As for the occupation of Odessa, Mykolaiv, and parts of Kherson, Kirovohrad and Vinnytsya regions, they have never been a part of Romania (Moldova and Wallachian principalities). The same goes for Transnistria. It was a pure act of aggression on the part of the then de facto leader of Romania, Marshal Ion Antonescu, which is recognized by all agreements signed after World War Two. As the lost party, the Romanians lost all these lands.

Now, Romanian President Traian Basescu tried to turn everything upside down. Speaking on June 22 at B1TV TV channel, he acquitted Antonescu's actions 70 years ago. "I would also give such an order. We had an ally. Under those circumstances I would have done the same," said Basescu, justifying the actions of the Romanian marshal.

Further, the president urged not to blame Antonescu for the deportation of local Jews and gypsies. Basescu even managed to find a "Russian trace" here. "We forget that the Romania head of state at the time (King Michael - Ed.). Antonescu was the Prime Minister. To one we pay homage and return the property, while we make the other a war criminal. Why? Just because one of them was a Russian servant? " Basescu said. Perhaps he meant that after the war Mihai renounced the throne and was awarded the Soviet Order of Victory.

Surprisingly, the reaction of Russian diplomats to such a blatant statement of the Romanian leader followed only on June 30. However, it was justifiably very tough. "Russia is indignant with the remarks of the President of Romania. Such a statement, particularly made on the sad day of the 70th anniversary of the Great Patriotic War, during which our people have lost 27 million lives, cannot be explained either by the current political circumstances, or answers to the provocative questions of the journalists," said Alexander Lukashevich, the spokesman of the Russian Foreign Ministry.

"It is obvious that such a shameless bravado justifying the Nazi aggression and desecrating the memory of the millions of victims of Nazism is unacceptable and must receive an adequate assessment of the civilized Europe," said Lukashevich. However, no response from the civilized Europe followed. The Romanian diplomats began commenting on the reaction of the Russian colleagues, foaming at the mouth.

"We believe the vocabulary used in the statement of Russia's officials on some of President Traian Basescu's comments on historical subjects to be inappropriate," the Romanian diplomats stated.

In the evening of June 30 Basescu took the floor again. He began speculating that the Molotov-Ribbentrop Pact, in which Romania was deprived of the territories occupied in 1918, was condemned by both the Russian and Romanian parliaments. "I do not understand what is so insulting, because the Soviet Union no longer exists. We have a relationship with the Russian Federation, but when it comes to a debate about the Soviet Union, this is a discussion about something that is already in the past," said the Romanian President, commenting on the scandal.

Basescu's words could have been left unnoticed if we were talking about a marginal politician from countries like Andorra or Kiribati. Yet, Romania is a rather large 22,000,000 strong country, a member of the European Union and NATO, which borders with two countries of the CIS, Ukraine and Moldova. In the coming years the base elements of missile defense will appear on its territory. Basescu is not a lone wolf. He has a powerful political protection, and Russia will not be able to just brush him off.

Speculations on the topics of history have long been an integral part of the Romanian foreign policy. Starting his presidency in 2005, Basescu openly questioned the statehood of Moldova and refused to sign an agreement on the borders with it. A year later, he referred to the Molotov-Ribbentrop pact and said: "Romania and the Romanians is the only country, the only people who remain separated in Europe after the reunification of the divided Germany. Romania remains divided into two countries." In 2007, Basescu said that he has already distributed a half million Romanian passports to the Moldovans.

The Romanian leader, shrugging off all diplomatic rules, brazenly interfered in the internal affairs of Moldova. During the memorable riots in Kishinev in April of 2009, he openly sided with the opposition, unhappy with the victory of the Communist Party in the parliamentary elections. His rational is clear: the then opposition and now the leaders of the ruling alliance openly advocate for the unification with Romania, and say that the Moldovan language should be called Romanian. Largely due to Basescu, a new election was held then, and the power in Chisinau was taken by the people who one way or another focused on Bucharest.

Striving for historical revenge, Basescu is actively engaged with Ukrainian affairs. While Yushchenko was fighting with the Russians, Romania virtually won at the International Court Ukraine's shelf Snake Island in the Black Sea, possibly rich in hydrocarbons. In Chernivtsi and Odessa regions mass distribution of Romanian passports is ongoing. According to some reports, approximately 100 thousand of those have been distributed. Today the Romanians and Ukraine are disputing a small island at the mouth of the Danube, close to Ishmael.

The Romanian president had never made such open statements in defense of the Nazi allies. However, he made countless provocative statements and actions. The distribution of Romanian passports in the neighboring regions of Ukraine, public intervention in the affairs of Moldavia and open refusal to recognize the Moldovan statehood is a challenge to the post-war Europe, the entire system of boundaries on the continent.

Creeping Romanian revenge has been ongoing, but the "civilized Europe" is silently observing the words and actions of Basescu. Russian diplomats do not always react to the statements of the official in Bucharest, or often react with a delay. However, in this case Romania threw an open challenge to Russia. This is a combination of a blow to the historical memory and contemporary politics and a public praise of the Nazi ally.

Leaving this statement without consequences is hardly a choice. The belated statement of the Russian Foreign Ministry is unlikely to be sufficient, especially because Basescu is not the only one who makes such statements.