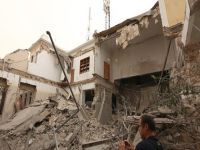 Mr. Ban Ki-Moon, France has broken international law. What are you going to do about it?

If no, then fine. Let us admit once and for all that the United Nations Organization is excellent at humanitarian affairs, helping refugees, distributing food, classifying world heritage, upholding gender equality, defending women's rights, the rights of the LGBT community and so on and so forth, wonderful job, pat on the back, great, mate.

As for international law, it appears the UNO is very good at drawing up resolutions but pig-awful at implementing them or making sure that nations uphold them. Well, certain nations let us say. I will tell you what, Mr. Ban Ki-Moon, let us draw up a rule.

If a nation is one of the Big Five, or actually, no, the Big Three (USA, UK or France) then basically it can do what it likes, correct? Because when for instance Russia and the PR China ask these three for details on their actions (as was the case with Libya) they promise to give them later and then are not forthcoming despite what was said before the vote.

So Mr. Ban Ki-Moon, suppose we dissolve the UNO as it exists today and admit it is a snivelling failure at upholding what it purports to uphold? Then we can found the WHORE (World Humanitarian Organization for the Resolution of Emergency situations), which your Organization is extremely good at, and as for making and keeping the law, let us either admit that international law does not exist, once and for all, or else set up another organization with the competence to practise what it preaches.

Because, Mr. Ban Ki-Moon, one of the five permanent members of the Security Council - in this case, France - has just admitted that it has broken international law by supplying weapons to the terrorists in Libya, against the terms of UNSC Resolution 1970 (2011). Please read my legal argument below:

The legal principle of the UN Charter is to avoid war and to ensure peace; that is why any act of aggression outside the specific scope of a Resolution must necessarily pass by a separate Resolution in the UN Security Council. Since the scope of the resolutions covering Libya - UNSC Resolutions 1970 (2011) and 1973 (2011) - do not include the supply of weaponry to the "rebel" cause in Libya - but instead prohibit it and cover attacks on civilians, then under no circumstances whatsoever would it be admissible, acceptable or legal for any entity to supply weapons or train the "rebels" against the Libyan authorities.

Definition of a civilian

Let us now turn to the definition of a civilian: someone who is not an active member of the military, police or a belligerent group. For this reason, men in uniforms, sporting weapons, heavy artillery, tanks, machine-guns and rockets are not civilians and for this reason if such persons use violence against the Libyan armed forces, then any counter-attack by such forces cannot be deemed to be an attack against civilians. And therefore, Mr. Ban Ki-Moon, any actions by NATO taken under these precepts are void, are they not?

Paragraph 9 prohibits the supply of weapons to Libya:

"9. Decides that all Member States shall immediately take the necessary measures to prevent the direct or indirect supply, sale or transfer to the Libyan Arab Jamahiriya, from or through their territories or by their nationals, or using their flag vessels or aircraft, of arms and related materiel of all types, including weapons and ammunition, military vehicles and equipment, paramilitary equipment, and spare parts for the aforementioned, and technical assistance, training, financial or other assistance, related to military activities or the provision, maintenance or use of any arms and related materiel, including the provision of armed mercenary personnel whether or not originating in their territories,..."

There is nothing whatsoever in this document which contradicts the scope of Resolution 1970 above. For a start, its introduction is very clear about the need to commit to the territorial integrity of Libya:

"Reaffirming its strong commitment to the sovereignty, independence, territorial integrity and national unity of the Libyan Arab Jamahiriya,"

Paragraph 4 does not contradict Paragraph 9 of Resolution 1970 on the supply of weaponry. It does not state anywhere that the terms are revoked or annulled. The insinuation that it does is a puerile and very devious attempt to twist around what is very clear under international law. The expression "all necessary measures" is qualified and restricted to the protection of civilians:

"4. Authorizes Member States that have notified the Secretary-General, acting nationally or through regional organizations or arrangements, and acting in cooperation with the Secretary-General, to take all necessary measures, notwithstanding paragraph 9 of resolution 1970 (2011), to protect civilians and civilian populated areas under threat of attack in the Libyan Arab Jamahiriya," and "notwithstanding" does not mean "substituting". It means "in spite of" in the context of "in conjunction with" and not "in contradiction of"; otherwise it would be necessary to state clearly that the terms and conditions of Paragraph 9 of UNSC Resolution 1970 (2011) are revoked, annulled, substituted or replaced. This not being the case, the argument that 1973 allows such supply or weaponry is an indication of the malice of those politicians who propose it and certainly does not constitute a legal basis for action.

Paragraph 8 reiterates the expression "all necessary measures" but qualifies this as pertaining to a ban on flights:

Finally, the reference by US Secretary of State Hillary Clinton that 1973 substitutes 1970 is as much an unadulterated, barefaced lie as the claim that she went into a war zone in the Balkans under fire. The expression "replace" indeed reiterates the implementation of the arms embargo and adds the provision for inspection of sea or air vessels.

"13. Decides that paragraph 11 of resolution 1970 (2011) shall be replaced by the following paragraph : "Calls upon all Member States, in particular States of the region, acting nationally or through regional organisations or arrangements, in order to ensure strict implementation of the arms embargo established by paragraphs 9 and 10 of resolution 1970 (2011), to inspect in their territory, including seaports and airports, and on the high seas, vessels and aircraft bound to or from the Libyan Arab Jamahiriya, if the State concerned has information that provides reasonable grounds to believe that the cargo contains items the supply, sale, transfer or export of which is prohibited by paragraphs 9 or 10 of resolution 1970 (2011) as modified by this resolution, including the provision of armed mercenary personnel, calls upon all flag States of such vessels and aircraft to cooperate with such inspections and authorises Member States to use all measures commensurate to the specific circumstances to carry out such inspections;".

As we see, the legal question is perfectly simple to follow and is very clear to see.

The bombing attacks are therefore illegal. What are you going to do about it, Mr. Ban Ki-Moon? Ha, ha...nothing...ha, ha...right...

The French military has confirmed that it has supplied the Libyan terrorists with weapons in the Nafusa mountains. Le Figaro newspaper has quoted Colonel Thierry Burkhard, of the French General Staff, in an interview with AFP, stating that:

"We began by dropping humanitarian aid: food, water and medical supplies. During the operation, the situation for the civilians on the ground worsened. We dropped arms and means of self-defence, mainly ammunition".

This follows the admission by France, the UK and Italy that it has "military advisors" in Libya (illegal) and reports that Qatar (the "queen" of the USA in the Middle East) has been supplying the terrorists from the east, in Benghazi.

So now we see the whole picture, Mr. Ban Ki-Moon. The frontiers were conveniently secured to the east and west of Libya, arms were smuggled in, the fight was started, the Libyan authorities reacted as anyone else would in the circumstances and not, against YOUR laws, the terrorists are being supplied.

So either you do something about it Mr. Ban Ki-Moon, or else go back to the WHORE and let someone else make the law. As the legend of Tan-Gun has it, there were three entities in the cave which preceded the formation of your nation, Korea - a tiger, a bear and a pile of mugwort. Which one of the three are you, Mr. Ban Ki-Moon? Yes, we noticed.