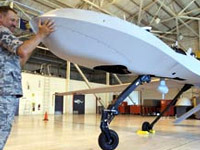 According to Arab and Iranian media, Teheran provided Russian specialists access to two US drones that had been downed over the Gulf in the beginning of January of this year. The news was announced by General Hajizadeh, the commander of air and space troops of Iran's Revolutionary Guards.

According to him, it was Moscow that asked for an opportunity to study the fragments of the downed drones. Nothing is known about the type of the aircraft. It was only said that the drones were conducting reconnaissance activities in the area where the Iranian Navy was conducting military drills. The drones, as it was said, could stay in the air without refueling for hours.

Teheran will additionally provide its own unmanned aircraft to Moscow. Iran developed the aircraft on the base of the technologies, which Iranian specialists discovered when studying the downed US drones.

Washington has never confirmed the information, although US officials have repeatedly expressed their concerns about the development of unmanned aircraft in Iran.

The reports about Iran downing American spy planes above its territory appeared before too. As it was said, Iran would always analyze the downed aircraft and then launch the production of its spy planes. According to the above-mentioned Iranian official, the country was producing its own drones in large quantities.

For the first time, the news was announced in January 2007 by deputies of the Iranian parliament. Several other incidents connected with the flights of American spy planes above the territory of Iran occurred afterwards as well.

Ali Yunesi, who served as the intelligence minister of Iran in 2005, said that Washington was trying to spy on the development of the Iranian nuclear program.

As for the Iranian drones, Teheran has recently announced the start of the production of Bavar-2 surface effects vehicle. In addition, the Islamic Republic is supposedly making the Karar strike unmanned aircraft, which is capable of carrying four missiles and two bombs.

It is worthy of note that Teheran has a number of reasons for which the cooperation between Russia and Iran in the field of defense does not seem to be reliable. One may recollect the terminated 800-million-dollar contract for the delivery of Russia's iconic S-300 missile systems to Iran. Iran was threatening to sue Russia for that decision, although the country has never started any legal action on the matter.

The fact that Iran has agreed to let Moscow study the fragments of the downed US drones, may mean that the Islamic Republic is simply trying to punish Washington. One should bear in mind the fact that Washington has recently decided to toughen sanctions against Iranian companies Tidewater Middle East (the largest port company), Iran Air (a national airline), its branch company Iran Air Tours, investment company Mehr-e Eqtesad-e and Behnam Shahriyari Trading Company. According to US officials, all these companies are involved in the activities to build nuclear weapons.

All of those companies have had business ties with Russian companies before. On June 24, official spokespeople for the Russian Foreign Ministry that the intention of the United States to toughen sanctions against Iran undermine the basis of cooperation in the Group of Six and affects the authority of the UN Security Council. "We are led to believe that the US-led sanction policies against Iran do not pursue the goal of strengthening the regime of non-proliferation of weapons of mass destruction," an official said.

To put it in a nutshell, Moscow said that it was not going to dance to Washington's tunes at this point. America's new accusations against Iran are absurd. Washington claims that the Islamic Republic was using the resources of the above-mentioned companies to continue the development of weapons of mass destruction. US officials also claimed that the companies were either partially or fully owned by the Islamic Revolution Guards Corps, which the USA declared a terrorist organization.

Iran has been actively trying to develop cooperation with Russia lately. Iran's TideWater Middle East Marine Service Company said in 2008 that it was planning to invest in the development of the Port of Astrakhan. Iran Air Tours uses the planes of Russian production in its services. The airline had plans to purchase a hundred of Tu-212 SM passenger liners.

Russia's interests will be damaged if the West put more pressure on Iran. Russia currently has to choose between attractive projects in Iran, looking back at the reaction from across the ocean.