Murder in the Amazon 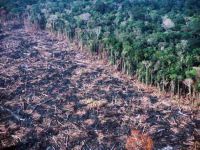 The Brazilian House of Representatives has just approved the abandonment of the Brazilian Forestry Code. If we do not mobilize now, huge expanses of our forests may be vulnerable to a devastating deforestation. The bill has generated widespread outrage and protests across the country. And the tension is rising...

The bill has generated widespread outrage and protests across the country. And the tension is rising: in recent weeks several respected environmental activists were murdered, allegedly by assassins hired by illegal loggers. It is essential to act now. They are trying to silence any criticism as the law is being debated in the Senate. But President Dilma has the power to veto the changes if we can persuade her to overcome the political pressure and take the role of a true leader on environmental issues.

Seventy-nine percent of Brazilians want Dilma to veto changes in the Forest Code, but our voices are being challenged by lobbyists for the timber. Now, it depends on us all mobilizing to shut out these lobbies. Let us unite now in a huge call to end the killings and illegal logging and save our forests. Sign the petition below - it will be delivered to Dilma when we get 500,000 signatures so:

The Brazilian forests are huge and important. The Amazon alone is vital to life on the planet - 20% of its oxygen and 60% of the world's fresh water comes from this magnificent rainforest. And so it's crucial to protect it.

That's why so many people see Brazil as an international leader in environmental issues and that is why the Earth Summit, a meeting to be held next year in order to prevent the slow death of our planet will be in Rio de Janeiro. On the other hand, we are also a rapidly developing country struggling to lift tens of millions of people out of poverty, and there is intense pressure on our leaders to clear forests and open mines to generate profit. Hence the danger of these leaders almost turning a blind eye in terms of environmental protection. Local activists are being murdered, intimidated and silenced. Now it is up to Avaaz members to ask Brazilian politicians to be firm.

We know there is an alternative. Lula, Dilma's predecessor, greatly reduced deforestation and consolidated the international reputation of our country as a leader on environmental issues, besides enjoying a huge economic growth. Let us unite now and ask Dilma to follow suit! Sign the petition to save our forests and then forward this email to all:

In the last three years, Avaaz members mobilized in Brazil with huge initiatives and campaigns which led to the extraordinary outcomes that we all desired, we won approval of a historic anti-corruption law and lobbied for the government to have a leadership role at the UN, protect human rights and intervene to support democracy in the Middle East, and even help to protect human rights in Africa and other regions.

Now, we are gathering Avaaz members around the world in a global call to save the forests. Together we can build a movement to proclaim the international forestry and Brazil once again as a true leader on environmental issues. Sign the petition and then forward this email to all.