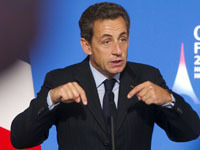 A scandal similar to one where the former head of the International Monetary Fund Dominique Strauss-Kahn is a defendant broke out in France. Only this time the accused is the former Secretary of State Georges Tron who is believed to be close to President Nicolas Sarkozy.

This story began unfolding in May. Georges Tron was reminded of the sins that he might have committed in the period from 1994 to 2010 when he was the Mayor of the Draveil (he later began combining this position with his work as the Secretary of State). Two women who used to be his employees accused him of sexual assault and went to court. They do not hide the fact that they were motivated by the detention of Strauss-Kahn.

The scandal was serious enough, and on May 29 Tron was forced to file a statement of resignation as the Secretary of State, retaining the post of the mayor of Draveil. He categorically denied all the charges against him, filed a counterclaim for defamation and even said that the case was fabricated by his political rivals. However, the prominent official was taken into custody on June 21, but quickly released. A couple of days later he was charged with a double rape and is now facing 20 years in jail.

The defense attempted a counter attack. Tron's lawyers argue that when leaving their jobs, none of the women accused him of harassment. In addition, one of the plaintiffs was allegedly asked to resign after she was convicted of misuse of the budget funds. The contract with the other woman was not renewed because she ruined her reputation with "indecent behavior." What this behavior was is anyone's guess.

This story would seem rather ordinary, if not for one thing. The case of Strauss-Kahn that the plaintiffs directly referred to was developing simultaneously. Many in France and abroad believe that the persecution of the former head of the IMF is politically motivated. He wanted to become a presidential candidate from the Socialist Party and would face head-on the current head of state, leader of the "Union for a Popular Movement", Nicolas Sarkozy.

Now take a look at Georges Tron. This politician is Sarkozy's fellow party member. However, in inner-party struggle he leaned not on the president but the former Prime Minister Dominique de Villepin, the worst enemy of the current head of state. Incidentally, a criminal investigation was initiated against de Villepin where he was accused of an attempt of defamation towards Sarkozy, as well as of a financial fraud.

This is another possibility: the president is trying to get rid of him to undermine the reputation of de Villepin. The latter, incidentally, is going to create his own party and take away members from the "Union for a Popular Movement". However, this raises another question: why, did Sarkozy appoint Tron as the secretary and kept him as the mayor of Draveil?

This could be a case of sober political calculation. Unwilling to split the ruling party, Sarkozy deliberately approached de Villepin's supporter. Many French experts even argue that the president worked so well with Tron that the latter became particularly close to the president. This means that the resignation of the Secretary of State is a blow to Sarkozy himself.

Then there is another theory. The oppositional Socialists could have retaliated for the removal of their main candidate, Strauss-Kahn. However, the French Left deny their involvement in the scandal. They believe that the accusations against Tron are advantageous for the ultra-National Front leader Le Pen Marine. However, the latter stated that she was only "half" happy.

Both French and Moroccan police have begun an investigation. Ferry has already been interrogated. However, the name of the suspect has not yet been released. It is only clear that we are talking about a man, and that this man is not Georges Tron. If this is true, the upper echelon of the French authorities will display not only a person accused of rape, but also a possible pedophile.

This would be a real blow to Nicolas Sarkozy. When two ministers are held for serious criminal charges at the same time, this raises questions to the president. After all, he is the one who selects candidates for ministerial posts. The voters would have doubts: is it worth to re-elect the person who is not so selective in terms of his staff for the second term? Sarkozy's personal life, too, to put it mildly, is not flawless. Neither he nor his second and third wives were examples of fidelity.

If we add to the list the two ministers and even Strauss-Kahn, who was famous for his sexual escapades before the story in New York, the portrait of the French political elite would look very unattractive. They represent two different parties: Tron is a Gaullist, while Strauss-Kahn is a socialist. It turns out that whichever of the two major parties may come to power, their representatives will bring along criminal and sexual scandals.

These stories also tarnish the image of France in the international arena. Foes of Paris, for example, may prevent the appointment of Christine Lagarde as the head of the IMF. The former head of the Central Bank of Mexico Agustin Carstens would be much more convenient for the US. The French authorities (and the EU in general) have far more different interests from the Americans than the Mexican authorities.

The person who could reap the fruits of success in these scandals in France is Marine Le Pen. In contrast to the Gaullists and the Socialists, she declares herself as a follower of the traditional values. She says that the Gaullists and the Socialists are mired in depravity, and she is the very third force that can stop this. She would also deal with illegal immigrants from North Africa that neither socialists nor Gaullists are dealing with.

It is not clear whether there is a political motivation in the cases of Tron or Strauss-Kahn, or whether one of the French Ministers is a pedophile. One way or another, but these stories are affecting the reputation of Sarkozy, and the image of the entire French political elite.