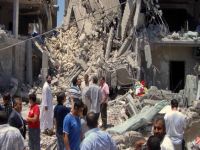 The North Atlantic Treaty Organization (NATO) on Sunday admitted responsibility for the airstrike that killed nine civilians, including two children in a residential area of ​​Tripoli, capital of Libya. The alliance argued that a system failure could have sent the weapon to the wrong target.

"It seems that a weapon hit the intended target and there may have been a weapons system failure that caused civilian casualties," said a statement released by Al Jazeera.

The text explains that allegedly "a military missile site was the goal of air strikes in Tripoli yesterday (Sunday) night."

The Libyan Government called NATO murderers and a criminal organization after this new bombing.

Chancellor Alobidi Abdulati also addressed the issue and said that this new bombing was based on "resistance of the Libyan people and their unity with the leader (Muammar Al Gaddafi) after three months of attacks."

Alobidi Abdulati said that this was a cowardly attack against the civilian neighborhood of Souk Al Joma (Hai Arada), directly aimed at a group of residences, through which they are trying to "break the spirit of the people of Tripoli (west) and aid a small number of terrorists that cause instability and disorder in the quiet town."

The Minister also warned that through this systematic and escalated violence, NATO is putting mental and psychological pressure on the Libyan people, so that they will "want a swift end to the aggressions (...) at any price."

However, he stressed that "this shows how little NATO understands Libya and their struggle for dignity, freedom and independence."

"We hold that Mr. (David) Cameron, Mr. (Nicolas) Sarkozy, Mr. (Barack) Obama and Mr. (Silvio) Berlusconi, are legally and morally responsible for this and other crimes committed in the past three months in Libya" he said.

He also indicated that the Secretary General of the United Nations (UN), Ban Ki-moon, was responsible for the atrocities committed by NATO under the watch of the organization and its Security Council. 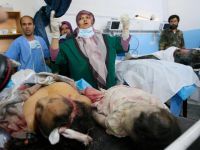 Alobidi recalled the various other attacks on civilian targets being undertaken by the North Atlantic coalition, which have killed nearly a thousand Libyan nationals, according to official figures.

He specified that bombings have been, "deliberate on hotels, oxygen factories, cars, civilian minibuses and civilian neighborhoods."

He said this is a direct appeal to the free peoples of the world and all Muslims to launch a "global Jihad" (essential concept of Islam that in Western languages ​​is often used as a correlate to the concept of Islamic holy war) against the oppressive and criminal West.

He added that it is never permissible "to allow the criminal NATO organization to decide the future of other independent and sovereign nations."

However, minutes later, the spokesman of the Libyan Government said that this does not imply a call to the Muslim people or extremist organizations to carry out terrorist acts against the capitals of the Western world and its people.

He said: "We have expressed our desire for peace here in Libya since the beginning. No one listened. We will never forgive, we will never forget that we're here in our land, together with our leader ready for peace and ready to fight for our freedom and honor."

Right after that, more "collateral damage" like oops. NATO admitted conducting an air strike in Sorman on Monday but insisted the target was of a military nature after Libya said 15 people, including three children, were killed. Sure, we believe you.