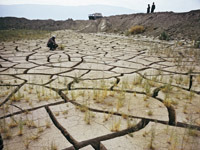 German Der Tagesspiegel is sounding an alarm about the possibility of re-emerging conflict in Central Asia, this time between Kyrgyzstan and Tajikistan.

According to the author of the publication Elke Windisch, the basis for this can be a "conflict over water and land." The most dangerous, according to the journalist, is the situation in the south-west of Kyrgyzstan. She wrote that the border often runs here in the middle of a village, and people on both sides blame each other for excessive water consumption. The situation is even tenser in some villages in Kyrgyzstan, many of which often do not have water due to incorrect operation of the water canals.

Elke Windisch also mentions presence of Tajik enclaves on the Kyrgyz territory. According to her, "many Kyrgyz accuse Tajik of intentional wrongdoing and a desire to move the border."

The author fears that the war over water is just the tip of the iceberg, and many energy projects in this region, rich in oil and gas, may be threatened.

Perhaps the findings of the German journalist are too pessimistic. However, the water problem on the planet is actually getting worse. This concerns not only Central Asia. There are also tensions over the distribution of waters of the Nile in Africa and gradual escalation of the problems in the Amazon basin.

With regard to Central Asia, the lack of water there became apparent in the middle of the 19th century, after the authorities began to pursue a policy of shifting nomadic cattle breeders to a settled lifestyle.

The advent of new large agricultural areas has resulted in additional water costs. Agriculture in Central Asia is mainly based on irrigation. In many cases the water is fed by irrigation canals flowing from the two largest rivers in the region - the Amu Darya and Syr Darya and their tributaries. Since these canals are open and shallow, the water loss from evaporation was enormous.

The situation has further deteriorated as a result of the population explosion observed since the late 19th - early 20th centuries and which, in fact, continues to this day. Over the last hundred and fifty years since the entry of Central Asia under the rule of Moscow, the population in Tajikistan has grown at least 10.2 times, in Uzbekistan and Turkmenistan - 6.5 times, and Kyrgyzstan and Kazakhstan - 7.2 times.

The water consumption has grown exponentially. As announced by representatives of the royal administration in 1906, "Tajiks began to expand the irrigated area wherever it was possible."

During the Soviet regime, this phenomenon was observed in all Central Asian republics. Through the development of technology it became possible to irrigate the former alpine pastures and water consumption has significantly increased.

Further increase in water intake was one of the main reasons for the Aral Sea disaster, which made the vast areas within a radius of hundreds of kilometers of coastline of the former Aral Sea unsuitable for human life.

With the collapse of the Soviet Union, the region's water problems have become more acute. First, the central authority that to some extent smoothed the contradictions between the elites, playing an arbiter in resolving major issues, and was a financial contributor and resource for local republics, has disappeared.

When they became independent, in addition to freedom the newly formed government acquired numerous problems. The economic development in the region in previous years was carried out mainly with Moscow funds. Now they had to cope on their own. Various tricks of the local elites to obtain preferential loans from Russia were not a way out. With the exception of Kazakhstan, the standard of living in the rest of the Central Asian republics of the former Soviet Union rapidly descended to the indicators of the most Third World countries.

In particular, it was applicable to Kyrgyzstan and Tajikistan. One way to overcome poverty and reach recovery was ambitious water projects in these countries. The largest of them is a construction site Rogun on Tajik territory, strongly opposed by Uzbekistan, fearing that it will not have enough water.

In fact, for both these countries the issue of the construction of Rogun is a matter of life and death. For Tajikistan, it would be a solution of many problems, ranging from the elimination of a permanent energy crisis and the start of a series of processing plants for mineral materials. More than that, this project would get, as expected by Dushanbe, solid hard currency revenues by transporting excess energy to Iran, India and Pakistan.

However, for Uzbekistan, even a partial loss of water from Tajikistan is fraught with serious problems because there is already a shortage of water there. It may result in a collapse of a number of agricultural areas. As a result, it came to mutual threats and even "saber-rattling."

The attempts of the international community to contribute to the solution of the situation were in vain. As a result, some experts have complained about the inflexibility of the opponents. However, one can understand both sides of the conflict. The water problem in Central Asia is one example of a situation which cannot be resolved through a compromise.

This problem largely creates or exacerbates a host of other issues, including migration of the local population to neighboring countries. Even the reduction of water losses by upgrading the existing inefficient agriculture would not improve the situation in the long term.

Given the continuing population explosion in the region, this will only delay the catastrophe. To remedy the situation, the authorities in some Central Asian republics should take care of birth control measures, based on the example of China and Vietnam. In the last decade its decline was not particularly noticeable, especially in Tajikistan. Of course, full implementation of Chinese and Vietnamese models locally is unlikely to succeed, but without addressing this issue further development of the region is simply impossible.