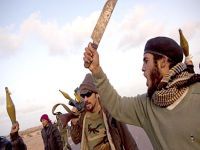 We all knew NATO was fighting against terrorists. Hey, hang on. Well, they were working with them in Afghanistan, they started speaking to them in Iraq, then started paying them not to attack in both theatres, then supported them in Libya and now whoops! Whoosh! BANG!| Sorry! They've bombed them near Brega. Except the news has suddenly disappeared from the net.

Well, we will probably never know, will we? We knew that NATO bombed Colonel Gaddafy's son's home and murdered three of his grandchildren (which seems to be a well-kept secret). Google it up. Now we understand that a terrorist convoy (whoops, sorry, "rebel") was strafed by NATO warplanes, spending 50,000 USD per plane per hour. Wonderful.

Tell you what, NATO, Bullseye! If perhaps one could concentrate more on these Islamist terrorists and less on, erm, Colonel Gaddafi's grandchildren, maybe people would have more respect. But no, NATO is what we see.

Democracy from 30,000 feet, what? Whooosh BANG! Sorry! (No actually NATO does not apologise). Did NATO apologise when it murdered Colonel Gaddafi's three grandchildren? No.

So now it attacks the terrorists in Libya (news disappeared suddenly), shall we praise NATO for its precision bombing? After all, NATO had claimed its weaponry was more and more precise, and that it was never going to hit civilians, so we can only ascertain that NATO murdered the three grandchildren of Colonel Gaddafi on purpose (sheer evil) and that today's supposed bombing of the Libyan terrorists (sorry, unarmed civilians) was a legitimate strike against, erm...

Good one, NATO! I am beginning to like you,