Gates says NATO is a mess and risking irrelevance 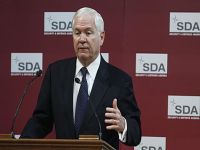 According to Robert Gates, the Atlantic Alliance has members unable or unwilling to fulfill their missions in Afghanistan and Libya

The American Secretary of Defense, Robert Gates, who leaves his post in the Obama government soon, said on Friday that the North AtlanticTreaty Organization (NATO) has become an Alliance poorly equipped to deal with its challenges. Members of the alliance are unable or unwilling to fulfill theit missions in Afghanistan and Libya.

He pointed particularly to the contrast between members who "want and are able to pay the price and bear the burden of the commitments of the Alliance and those who enjoy the benefits of joining NATO, but do not want to share the risks and costs."

In his farewell speech before the NATO Council in Brussels, he called for urgent action to "avoid the very real possibility of collective military irrelevance." According to him, "nations must be responsible for their share of the common defense."

Affirming that an estimate indicates that European defense spending has fallen nearly 15% in the decade that followed the attacks of September 11, 2001, Gates said that only five of the 18 member countries currently spend 2% of their GDP on defense - the percentage that is stipulated by the organization.

Gates said the allied mission in Afghanistan has exposed significant deficiencies of the UN - in military capacity and political will. "Despite more than 2 million soldiers - not counting the American military - NATO has encountered difficulties, sometimes desperately, to maintain a position of 25 to 40 thousand soldiers, not just in the field, but in crucial support posts" he said.

Gates criticized the lack of political will and contributions of military assistance from some allied countries to the mission in Libya, warning that it could jeopardize the operation. "It became abundantly clear that the deficiencies in cooperation and political will have the potential to compromise the ability of the Alliance to make an effective, efficient campaign supported by air and sea," he said.

The Pentagon chief said that these deficiencies were present despite the mission having broad political support and it is to be treated as an operation without ground troops that is developed in the "backyard" of Europe. According to him, "less than half adhered to the mission and less than a third were willing to participate in the bombings," he affirmed.

Norway and Denmark represent 12% of the aircraft that launch air strikes, but the rockets that they launched only struck a third of the targets set, he lamented. Belgium and Canada have made important contributions to the bombing mission in Libya, he said, being sorry that "these examples are the exception."

The secretary admitted that many of the member countries remain on the sidelines of the military operation against the regime of Libyan leader Muammar Gaddafi, not because they do not want to take part, but because they simply cannot collaborate more.

"The military capabilities simply are not there, in particular there is a deficiency in assets that serve to direct intelligence tasks," he said. "The sophisticated planes are used for little if allies cannot identify, prosecute and eliminate targets," he affirmed.

Although the allies fight against a regime weakly armed, in a country where the population is not highly concentrated, many countries have begun to notice a shortage of ammunition after 11 weeks of operations, again requiring U.S. assistance, he said.

"Despite the urgent need to invest more in vital equipment and adequate personnel, needs that are obvious for two decades, many allies are unwilling to make fundamental changes in defining priorities and finding the resources," he said.

Gates described as "unacceptable" the gulf that exists between those who are willing to share the burden of the military operation and pay the price for it and those who show a lack of will to contribute resources.

The retiring Gates called on Germany and Poland to contribute. The two have refused to participate in the Libya campaign.  He also mentioned Spain, Turkey and the Netherlands, who participate, but not with bombing, insisting they increase their role.

However, Gates admitted that NATO was able to meet its original objectives and that, although the mission has highlighted some shortcomings, it has also demonstrated the potential it has to perform an operation led by European countries with U.S. support.