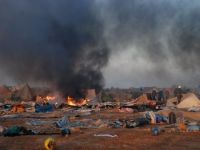 Where are the air strikes? Where is NATO? Civilians are being brutally attacked in Morocco, the country which illegally holds vast swathes of territory it invaded in Western Sahara, Saharawi prisoners are being tortured, yet...nothing. Where is Morocco? An amazing case of the two-faced approach by the USA and NATO.

So Colonel Gaddafi is fighting armed terrorists in his country, terrorists who raped children, hacked a boy's legs off, tortured a child to death, decapitated people in the street and launched a massacre against black Libyans and the response by Washington and its toy-boys (NATO) is to commit dozens of terrorist attacks occasioning murder and criminal damage and side with Hasidi, who was arrested in Pakistan for belonging to Al-Qaeda and who exported terrorists from Benghazi to fight against NATO in Iraq.

In Morocco, nothing. In 2005, I instructed a journalist working in a magazine in which I was international director, Africa Today, to interview a high representative from the US DoD (Defense department) and to ask about Western Sahara. The answer: "Er...well...er.....that....that is covered by our.....South East Asia Department". Enough said.

Google up Western Sahara and The Green March and you will get the history of Morocco's aggression and illegal occupation of this country and its systematic refusal to hold a referendum under acceptable conditions. What you will not find is the following:

Pravda.Ru has received information from Saharawi (Western Sahara) political prisoners in the Moroccan-run prison of Tiznit

"The goal of the soldiers was clear," says Mohamed from inside prison, "ending the union of the Saharawi prisoners, intimidate and try to destroy us mentally," adding that "the procedure they had set: to go cell by cell, selecting the Saharawi, and savagely looted our belongings, leaving our cells in poor condition and take what little remained serviceable." The attack resulted in the disappearance of political prisoner, writer and journalist Mustafa Saharan Abdedaem and also Sahrawi political prisoner and journalist Mahmoud Kasem, whose whereabouts have not been heard. "We do not know the whereabouts of our colleagues," says Salmi, and demand to open an independent investigation into the events, as well as assistance from international organizations such as Human Rights Watch and Amnesty International to clarify facts and shed light on the whereabouts of the two partners."

Political prisoners are attacked, disappear and are butchered frequently by the Moroccan authorities who try to silence them making sure their message does not reach the international community.