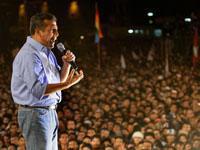 Peru, that is often called the heiress of the Inca Empire, summed up the results of the recent presidential election. For the first time in 40 years, the South American country will be headed by a representative of the Left, the head of the unit "Peru Wins" Ollanta Humala. To some extent, this is a defeat for the U.S. traditionally disliked by the Left.

The presidential election in Peru was particularly intriguing. Until a few months ago, polls showed that Humala had virtually no chance to not only win, but even reach the second round. However, in the first round, which took place on April 10, he managed to confound the skeptics by winning with 29 percent of votes. The second place was taken by the daughter of the former dictator Keiko Fujimori, who was trailing six percent. As a result, these two politicians went into the second round.

Ollanta Humala is one of the few Latin American leaders representing the indigenous people of the continent - the Indians. Besides him only the President of neighboring Bolivia, Evo Morales, belongs to this race. Indian blood is flowing in the veins of the main fighter against the U.S. in the Western Hemisphere - Venezuelan President Hugo Chavez. However, unlike Humala and Morales, he is not a full-blooded Indian.

Humala is known in Peru quite widely. In the past, like Chavez, he was a military who rose to the rank of a lieutenant colonel. In 1995, President-elect took part in the border conflict with Ecuador. Five years later, he raised a revolt against then head of state Alberto Fujimori - the father of his current rival in the election. In 2005 his brother rebelled in Andahuaylas.

Five years ago, the Indian colonel participated in presidential elections. Then Humala went to the people with the promise to deal with the corruption of the former right President Alejandro Toledo. He vehemently criticized the United States, and called for joint action by Latin American countries against the "Yankees." According to Wikileaks, the supporters of Humala's opponent (now the President leaving his office) Alan Garcia sought support in Washington.

Apparently, Americans have provided it, judging by the fact that Humala was openly supported by Hugo Chavez. Praising his Peruvian "comrade", the Venezuelan leader did not hesitate to harshly criticize both the U.S. and Alan Garcia. Chavez called the latter "the biggest corrupt in the history of Peru." However, Garcia was elected. Experts believe that the excessive zeal of "violent Hugo" rendered Humala a bad service.

Five years have passed, and Humala became more experienced. He is no longer looked at like Chavez's protégé, and there is not so much radicalism in his speeches. He no longer curses the United States. He even swore on the Bible that he would not follow the same path of the loss of democratic freedoms as the Venezuelan leader. Humala has promised that he would respect democracy and as the President would act only within the framework of the Constitution, respecting the rule of law.

Yet, he announced his desire to move closer to Brazil, whose last two presidents, though not radically anti-American, are hardly the supporters of the United States. Luiz Inacio Lula da Silva and Dilma Russeff talked about Brazil as an alternative to Washington in Latin America. They caused more troubles for the States than Chavez, so Humala is hardly a pro-American politician.

Strictly speaking, the program included a set of slogans that are hardly pro-US. They were slogans of social justice, strengthening the state regulation of the economy, and more equitable distribution of the income from mining and mineral exports. Given that US companies play a prominent role in the economy of the country, Washington is unlikely to enjoy the redistribution of income.

Who was the rival of Humala? It was the leader of the right block "Power 2011" Keiko Fujimori, who had much more right-wing slogans. She promised to introduce tax policy favorable to big business. However, she also promised to extend pension insurance and expand free education for less affluent groups of the population. However, in this she was no different than her opponent.

Maybe the Peruvian of Japanese descent would have managed to win, if it was not for the shadow of her father, the former President Alberto Fujimori who was in office in the 1990s. Today he is serving a 25-year jail term for corruption, abuse of power, creation of death squads, and engaging in physical elimination of his opponents. It is believed that on the order of pro-U.S. Fujimori at least 25 leftist activists have been destroyed. At the same time the dictator was able to fix the economy.

Was Keiko Fujimori an American protégé? She may have been, but her candidacy was not directly supported by Washington. One way or another, nearly all opinion polls gave the victory to her. However, many in Peru were not happy with their options. Famous local writer, Nobel laureate Mario Vargas Llosa, has likened the choice between Humala and Fujimori with a choice between AIDS and cancer. In the end, he leaned towards Humala.

As a result, the campaign scales tipped in favor of a "real Indian" Humala. Nearly 51.5 percent of voters gave him their votes, while his opponent secured 48.5 percent. If everything goes as planned, this is the politician who will lead the 30 million-strong country that has oil and gold, silver and copper, and where at least 45 percent of the population lives below the poverty line. The latter, of course, are eagerly awaiting the redistribution of wealth.

Time will tell whether Humala will stick to "radical socialism," following the example of Chavez, or will be in line with the "moderate left" like Brazil. Given his minimal advantage in the election, the Brazilian scenario would satisfy the people to a greater extent. The country where the Right have been in office for 40 years is not accustomed to excessive left radicalism.

One way or another, the victory means a loss for the U.S. in South America. Whereas previously the United States could rely on the axis of Colombia - Peru - Chile, now the middle link may no longer be there. Peru may join if not the radical anti-American bloc ALBA, where the first violin is played by Chavez and Bolivian leader Morales, then certainly Brazil and Argentina, which, albeit not so openly, but still want to reduce the American influence in the region to a minimum.