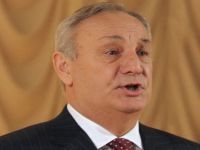 The 62 year old President of Abkhazia, Sergei Bagapsh, died yesterday in Moscow after successful surgery on his right lung to remove growths. Already up and about after the surgery, he then developed complications. His lungs stopped functioning and he lost consciousness, necessitating that he be placed on a ventilator.

Doctors did everything to save Mr. Bagapsh, but they subsequently discovered he was suffering from lung cancer that had already spread through his body. He succumbed to heart failure.

Abkhazia is a small country with around 242,000 inhabitants. Abkhazia is endowed with subtropical beaches and abundant citrus fruit.

Georgia had failed to follow procedure when it broke away from the Soviet Union, as it was required that a referendum be held. On August 14, 1992, Georgia invaded Abkhazia, but met with armed resistance from local militia and volunteers.

The conflict ended on September 30, 1993. Georgia lost control of Abkhazia, which turned permanently into a self-governed territory that did not recognize Tbilisi's sovereignty over it.

Mr. Bagapsh expressed on several occasions his feeling that Georgian President Saakashvili was waiting for another chance to divert attention from internal problems to attack his neighbors again and called Saakashvili "a natural-born aggressor."

He also stated that his country would not beg for diplomatic recognition. After the Georgian aggression on South Ossetia, Russia gave official recognition to Abkhazia. After Russia, Nicaragua, Venezuela and the small South Pacific island nation of Nauru recognized Abkhazia officially.

Sergei Bagapsh was a great patriot and statesman. He was Prime Minister of Abkhazia from 1997 to 1999 and was elected President in 2005, becoming the second President of the Republic of Abkhazia. Bagapsh won a second term in the presidential election held in 2009.

He was married to a Georgian named Marina Shonia and had a large number of ethnic Georgian in-laws. Mr. Bagapsh was born in Sukhumi on March 4, 1949. He obtained a degree in agronomy, then served in the Soviet armed forces in 1973-1974. During the Soviet years before Georgia broke away from the Soviet Union, he served in the Georgian Komsomol.

Mr. Bagapsh then went on to become the First Secretary of the Communist Party for the region of Ochamchire and served in various posts until he was appointed to the office of Prime Minister of Abkhazia on April 29, 1997.

For the next 3 months, Vice-President Aleksandr Ankvab will assume the president's duties. Then in 3 months elections will be held to elect a new President.

A ceremony is being held in Moscow on Monday. His body will then be flown to Abkhazia. Bagapsh will be buried on June 2, in the village of Dzhgerda in the Ochamchira district where his parents were buried.

President Medvedev affirmed the friendly relations that Sergei Bagapsh maintained with Russia. "Bagapsh was a loyal supporter of friendship and alliance with Russia, and he tirelessly worked to deepen close bilateral ties between our countries."

A telegram from Prime Minister Vladimir Putin was placed on the President of Abkhazia web page giving tribute to the man who will be deeply missed by his countrymen and friends of Abkhazia.

"A prominent politician and a statesman, a true patriot of his Motherland has departed this life. The first steps of Abkhazia as a sovereign subject of international law are associated with Sergey V. Bagapsh's name; his role in forming the Abkhaz statehood and socio-economic development of the republic can scarcely be overestimated.

In our memory Sergey V. Bagapsh will for ever remain as an advocate of principles of strengthening traditional Russian-Abkhaz friendship, intensification of the entire complex of bilateral cooperation. We sincerely grieve together with the fraternal people of Abkhazia.

Please, convey my words of sympathy and support to Sergey Vasilevich's family."