No democracy whatsoever for Yemen and Bahrain 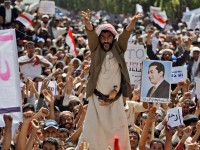 Why would NATO not bomb Bahrain and Yemen? It would seem than their leaders, from a Western point of view, are no better than Gaddafi or al-Assad. According to the Western elites, they allegedly are rigidly oppressing their people.

What about the behavior of the Bahraini King and the Yemeni president? The former, unable to cope with people's anger, brought in the Saudi troops for the suppression of the unrests. After the mass beatings and shootings of the protesters, the authorities have banned doctors from providing assistance to the opposition. King al-Khalifa was unaffected by the fact that there were no weapons in the hands of the protesters.

In turn, the Yemeni President Ali Abdullah Saleh continues to destroy those who oppose his regime. The mass protests demanding his resignation have been going on since the beginning of February. The opposition accuses him of the appalling corruption.

The authorities responded to this by a brutal repression. Peaceful demonstrations were shot by police. Even at the lowest estimates of the Western media, the assistants of Saleh killed over 150 people during their dispersal. However, judging by the data of several local human rights activists, hundreds were dead among Saleh's opponents.

According to the information from Sanaa, during the last week the Yemeni president has surpassed all his previous achievements. In the recent days the situation has deteriorated markedly for Saleh. He spoke out against a number of important clans, including the country's largest tribe Hashid, whose fighters are now fighting against the National Guard loyal to the president.

Head of State made a great mistake refusing to conduct a dialogue with the leaders of the Hashid, his native tribe. According to Yemeni sources, the rally was preceded by an attempt to arrest the clan leader Sheikh Sadiq al-Ahmar. The reason for this was his statement about his transition to the opposition.

In fact, we are now talking about a popular uprising. The president fears that it could turn into a full-scale civil war. This is not surprising as from time to time the country gets immersed in a real chaos. This time, the chaos is created by the President's actions.

The cause for the armed actions that commenced on May 23 was the third failure of Saleh to immediately resign. Now he explains it by an alleged threat posed by the insurgents and militias of al-Qaeda to transform Yemen in the failed state as it happened with Somalia.

If this is the case, he said, then he would not make any concessions to his opponents and would fight those who threaten the security and stability in the country. Apparently, this is why one of his last speeches was made in the spirit of "I will leave when the violence stops."

Saleh, who has been raining the country for 33 years, refused to sign an agreement on his resignation with the opposition on three occasions, each time putting forward new conditions. It is worth mentioning that the members of the Cooperation Council for the Arab States of the Gulf (GCC) that works closely with representatives of Western countries also tried to persuad him.

On May 25, British Foreign Secretary William Hague was begging Saleh to sign the "road map" as quickly as possible to save the situation. Now the attempt of a peaceful transfer of power has failed miserably.

The Yemenis, tired of his 33-year rule and repression, have taken up arms. Each new act brings closer a catastrophe for Saleh. The prosecutor's office of Yemen issued another warrant for the arrest of ten leaders of the Hashid. Thus, Saleh finally signed his own death sentence. It was his fighters who tipped the scales in favor of the opposition. In particular, they seized the building of the news agency SABA, the Ministry of Industry and Commerce, as well as the national airline Yemenia.

The situation for Saleh has markedly deteriorated as a result of the armed action of the Arhab tribe, led by the famous Sheikh Abdul Majid al-Zindani, who is considered a prominent fundamentalist, allegedly supporting terrorism, by the U.S. and Israel. The soldiers of the Arhab have blocked the international airport of the country.

The seriousness of the situation is confirmed by the fact that the Americans have begun emergency evacuation of American citizens from Yemen, including part of the state embassy in Sanaa.

Why did the West that so zealously protects the armed Islamists who opposed al-Gaddafi and Assad have not noticed the mass killings by Saleh, as well as highly reactive, in terms of democracy, monarchy in Bahrain? It would seem that there is not much difference between the Arabs of Libya and Syria and the Arabs of Bahrain and Yemen. After all, in terms of the Western values ​​of protection of different kinds of democratic freedoms, Saleh and Al-Khalifa are begging for democratization much more actively than Qaddafi and Assad.

However, the answer is simple enough. Bahrain is economically connected mainly to the United States and Saudi Arabia. Due to the fact that much of the Bahraini oil goes to the Americans, it would be foolish to expect them to refuse to support the local king who is successfully plundering the national wealth with their help.

The Bahraini Al Khalifa dutifully agrees to the conditions lucrative for the West and Saudi Arabia. This is his main difference from the obstinate Gaddafi. He did not want to give up his oil and gas fields for a pittance to multinational corporations.

Saleh is also considered one of their own. He was skillfully fooling the West, claiming that he is the only one capable of preventing the triumph of al-Qaeda in his country. In return he received astronomical sums of money to fight the terrorists amounting to half billion dollars a year.

However, the Western approval did not save Yemen from destabilization. Moreover, the fire that started in Tunisia and Egypt and flung to Libya and Syria thanks to the West, seized those Arab countries whose regimes were the U.S. allies. The fall of Saleh threatens to become one of the main shortcomings of the West after the overthrow of the Shah in 1979. Instability in Yemen poses a serious threat to all Arab oil producers in the entire Gulf region.