Tbilisi Massacre: the Apotheosis of the Georgian Democracy 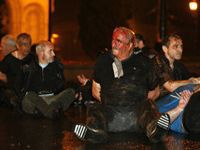 Georgian democracy showed its maturity in all its glory. On May 26, the Independence Day of Georgia, a bloody massacre took place in Tbilisi. According to a prominent representative of the opposition Nino Burjanadze (a member of the executive committee of the opposition Social Forum), it overshadowed even the campaign to restore order of April 9, 1989.

According to her, "even General Rodionov did not act like this." However, is it appropriate to refer to his name in this case? It would suffice to say that some of his subordinate officers from among the junior and middle ranks still complain that he did not let them roll up their sleeves and use military weapons during the revolt.

At this time we are talking about yet another attempt to achieve the resignation of President Mikhail Saakashvili. From the very onset it was clear that it would end in failure. Earlier one of the main representatives of the opposition Nino Burjanadze addressed the nation with a wake-up call: "Tomorrow we are waiting for the entire Georgia. Those who want to live in a decent country will come, and if they won't, we will have clean consciousness before ourselves and our children." However, the opposition banners with slogans "Michael, Go Away" and "We Stand for Free Elections" for some reason have not found mass approval of the Georgians. The opposition rally in Tbilisi demanding Saakashvili's resignation on the night of May 25, according to various sources, brought together only four thousand supporters of the opposition.

Despite the poor attendance, the opposition leaders have decided to fight Saakashvili, throwing their supporters under police truncheons. Nino Burjanadze vowed that the opposition "will not step back and continue the peaceful struggle for the resignation of Mikhail Saakashvili and scheduling of early parliamentary and presidential elections."

In turn, chairman of the organization, five-time world champion in chess Nona Gaprindashvili, said that "there can be no question of the termination of peaceful demonstrations demanding the resignation of the current administration that brought the country to a standstill."

The opposition members decided to give the president a decisive battle near the parliament building on Rustaveli Avenue. They took the podium intended for Saakashvili to greet a military parade marking the Independence Day.

One of the leaders of the protesters George Kobakhidze did not hide the fact that they intended to prevent Saakashvili from greeting the military parade. In other words, this symbolic action was pursued to prove that Saakashvili was no longer able to perform the duties of the president and commander in chief.

However, the Georgian leader has shown that he is a worthy student of his American democratic idols once again by rigidly dispersing the opposition gathering. At least three people were killed and dozens (according to some information - hundreds) of people were injured. This was the way the Georgian elite celebrated the 20th anniversary of "restoration" of independence of the Georgian state.

During the past years Tbilisi tried to actively demonstrate its democratic achievements. If we were to take the words of Saakashvili seriously, it would seem that only various American freedoms would be more democratic than Georgia. Allegedly, the mafia have been eliminated, the police, including traffic, does not take bribes, and Russia is jealous of the unprecedented progress of its southern neighbor.

Of course, in light of such outstanding developments   the unfortunate incident on the Independence Day may go unnoticed. According to the logic of Saakashvili, this does not make Georgia less democratic. After all, on the background of the Democratic People's Republic  considered by the West a concentration camp fenced with barbed wire, or the Democratic Republic of Congo (DRC) where for the past 10 years over four million people have been killed, Georgia still does not look so hopeless.

But what about the tradition of the suppression of national minorities, piously observed in the independent Georgia since 1918? From the perspective of the current power of the Georgian elite, nothing special is going on. Insidious Russia, they say, has stolen Abkhazia and South Ossetia from Georgia, and the events in Javakheti and areas populated by Azerbaijanis is nobody's business.

Saakashvili's achievements in combating corruption, which he is so proud of, do not look so unambiguous. Georgian defender George Kaji told Pravda.ru: "Yes, Saakashvili really disbanded the most notorious mobsters of the country by taking away their property. They were forced to leave, including in the Russian direction. But the holy place, as you know, never stays empty. Mafia, in fact, has become a state phenomenon to even greater extent."

Certain details of the events on the night of May 25 are particularly interesting. The opposition tried to attract people with bright illustrative materials. They included banners picturing people whose death the opposition is blaming on the Saakashvili regime, and photographs of homes and vehicles reportedly obtained not quite righteously by his representatives.

However, in the morning Saakashvili found a good answer to his opponents. He stated that the two policemen who were dispersing the rally were killed by a car of the opposition, obviously purchased not on their salaries. One way or another, they are blaming each other for the corruption that the Georgian elite consider outlived.

In any case, as evident from the events of May 26, the opposition leaders climb to power over the dead bodies. Now, realizing the lack of their strength, Georgian politicians like Nino Burjanadze are trying to overthrow Saakashvili and seek the support of others, including Russia. However, judging by the true mood of the opposition, if they come to power, Russia would not win, but quite the opposite may be expected. Their true attitude about the future of Abkhazia and South Ossetia is a good example. In contrast to the odious Saakashvili, Burjanadze will act against Russia in a more cautious and efficient way.