Obomber and Camoron: The dynamic duo 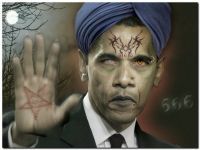 Did anyone notice the supercilious smiles and smirks on the faces of Barack Obomber and David Camoron playing ping-pong against some kids in an inner-city school, acting as if they did not have a care in the world? What a perfect example of two cold-blooded child murderers cavorting together and having fun as their forces commit war crimes in Libya. What a shining insight into how the callous, calculating minds of two frauds, two resplendent failures, try to convince and deceive others based upon lies, skulduggery and sheer evil as they bask in a sea of self-proclaimed self-righteousness.

Ladies and gentlemen, these are two nasty pieces of work, two despicable specimens of the very worst the human race has to offer. These two apologies for men should lay down at night and hear the screams of the three murdered grandchildren of Colonel Gaddafi - murdered by their forces - as they burnt to death, the victims of a NATO bomb dropped on a private house in Tripoli to enforce a no-fly zone and to prevent them from being part of a control and command chain which put innocent civilians in danger.

Before they sleep and as they dream, these two callous, cold-blooded killers should see the images of those three children drowning in their own blood, chocking and gasping for their last breath, as the temperature in the room around them reached one thousand degrees centigrade and as the skin on their tiny hands and feet and faces literally fried.

And when they wake up every single morning of every single day for the rest of their miserable lives, Barack Obomber and David Camoron should see the questioning horror in those three sets of innocent eyes, asking why?

And as these two child murderers look into the mirror each morning and look into their faces, they should see that horror, they should hear those screams, they should smell the stench of burning flesh, the flesh of the three innocent grandchildren of Colonel Gaddafi who their forces precision-bombed so successfully.

And do you know what ladies and gentlemen? I bet neither of them could care less. I bet they even think they are justified, smug, clever, right, righteous.

Yet the rest of humanity knows the truth. The rest of humanity looks down upon these two despicable hate-filled pariahs with utter contempt, aware that Muammar Gaddafi has been wronged by a monumental smear campaign which overlooked the fact that he is fighting against Islamist terrorists, who these two murderers support, overlooked the fact that Colonel Gaddafi's excellent humanitarian record was about to be awarded with a UNO prize in March and overlooked the great deal that he, not they, has done for Africa.

The petitions running the Internet, the outrage expressed in forums and the sheer, seething hatred felt for NATO and its illegal invasion must surely have turned the tide. Nothing these two evel men or their evil organization ever does again will pass without scrutiny. Just like that sickening bunch of mass murderers who slaughtered hundreds of thousands of innocent civilians in Iraq (among them their two nations as usual) today half a dozen protagonists bomb Libya and kill Libyans based upon false premises and swansongs about innocent civilians as they openly and illegally support Islamist terrorists - the same ones fighting against NATO in Afghanistan and Iraq, led by the same man who was arrested fighting for Al-Qaeda.

When Obomber was given that Nobel Peace Prize, he was given it for a reason and with an implicit mission attached to it. It was an award of hope, hope for the future. In bombing Libya, in attacking the forces of Colonel Gaddafi fighting Islamist terrorists, Barack Obomber has proven himself totally unworthy of the prize and an insult to the international community.

The President of the United States of America has done nothing for his country, his people or the world. He is an abject sniveling failure and if anyone has to go, it is him. Let us hope he is forced to kiss the feet of Muammar al-Qathafi before he does so, for he is not fit to stand beside men such as he who fought against Apartheid, who outlawed Obama bin laden and Al-Qaeda after the USA armed them and fought alongside them. As Barack Obomber takes the side of Abdel-Hakim al-Hasidi, in breach of international law, against Colonel Muammar Gaddafi, he is making one of the most crass mistakes of any leader in the history of Mankind.

Neither he, nor his friend-in-murder Camoron can see that is a measure of their ineptitude and proof of their inability to be in their positions. They are two silly little boys playing at politics and they do not make the mark.

If they wanted to save any reputation for the history book, they would admit their mistake, stop the attack against Libya, now, and allow the people of Libya to deal with the consequences. The firms from the clique of nations which engaged in this imperialist episode should be banned from any reconstruction process and indeed, should be banned from the African Continent. This however would not remove the blood from their hands because to the end of their days, Obomber and Camoron and their friends will have the death-screams of the three innocent grandchildren of Colonel Gaddafi ringing in their ears.

Know what? I believe they couldn't care less.

What can YOU do?