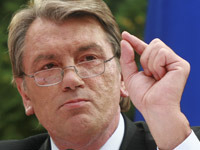 One year after the ignominious departure from the office, former Ukrainian President Viktor Yushchenko decided to send politics to hell. Henceforth, he will focus on "cultural and patriotic" education of the Ukrainian people. He will be doing it in a museum.

It must be said that the ex-head of state has taken care of his employment in advance. Back in February of last year, Yushchenko issued a decree establishing the supervisory board of the National Cultural Art and Museum Complex "Art Arsenal" in Kiev. Yushchenko assigned no one but himself as the head of this body.

Transformation of the Art arsenal into a special complex is also Yushchenko's project that started two years ago. Then he set the task to collect the best samples of the Ukrainian national art so that it would be a museum "better than the Louvre." In short, that was the moment that marked the beginning of Yushchenko's transformation into a "museum worker." Now we can only wait and see what the reaction of the new government will be.

As it turned out, Viktor Yanukovych has nothing against Yushchenko's new job. On April 28 the president issued a decree establishing the Development Council for "Art's Arsenal." The document states that the museum plays an important role in the promotion of the national cultural heritage. As a result, the Council has two co-chairmen - Yushchenko and Culture Minister Mikhail Kulinyak.

Recently, former president called a press conference to talk about his achievements in the new endeavor. According to him, he agreed to develop the museum not out of political but purely cultural reasons. His goal is to make the arsenal a "museum of museums like the Louvre and the Hermitage. "I will not comment on the political situation, I am no one's recruit and will not become one," said Victor Yushchenko.

Then Yushchenko switched to non-parliamentary lingo. "I do not want to look at this project politically, I want to send the politics to hell ", Yushchenko said. However, he later denied what he said earlier. He believes that the task of the museum is to make the people who come out of it feel like real Ukrainians. This shows that the former president remained true to himself. Fighting against all things Russian is his pet subject, even in the cultural and educational endeavors.

It is worth mentioning that Yushchenko had long been famous with his thirst for art. He collects Ukrainian antiques. He has a traditional stove, traditional embroidered shirts and Cossack saber in his house. He is interested in excavations of the ancient culture of Tripoli and collects pots. His love for antiques is combined with beekeeping. There is a reason his fellow citizens still often refer to him as the "beekeeper."

"He looks like a normal guy," once said about Yushchenko the late Viktor Chernomyrdin. "He is just this way - the draws, collects shards. He can walk around a stump for three hours, look at it, fantasize. At home he has a collection of mills, millstones, a huge one! He installed windmills in Kiev... And this man suddenly manifested himself like this."  He was clearly referring to the antipathy of the ex-president to all things Russian. He could not have said it better.

However, the fact of the matter is that Yushchenko actually exposed himself. He remains a politician and a Russophobe, even sending politics "to hell." Glorification of Stepan Bandera and traitorous Hetman Mazepa, the deliberate celebration of the dates when at least some part of Ukrainians opposed Russia and the Russian are the chapters of the same story.

It seems that during the news conference, Yushchenko lost his nerve, and not for the first time. Last winter, the former president came to the prosecutor' office, and then one of the bystanders shouted: "Bastard! How can you look people in the eye? "The politicians could not resist.

Vladimir Skachko, an independent Ukrainian political analyst, editor in chief of "Kiev Telegraph" commented on the new "museum - Russophobe" revelations of Yushchenko for "Pravda.ru":
"The words of the former guardian are perceived as clowning. Strictly speaking, the vast majority of Ukrainians believe Yushchenko to be a clown who is trying to stay afloat by all means. However, he has no chances to stay in politics. His rating on a scale one to a hundred is one.

The current government gave Yushchenko a niche of critiquing their worst enemy - Yulia Tymoshenko. However, it seems that the ex-president's vocal apparatus functions separately from his brain, and he confuses the sinful with the righteous. He was given one mission, but instead jumped on his favorite topic.

Yushchenko's reminds a political necrophile who elevated his hobby to the rank of state policy. The problem is that he made 30 percent of Ukrainians feel like "victims of the evil neighbors." The younger generation was affected more than others. These are them who are voting for ultra-nationalists from "Freedom." These are them who beat the veterans in Lviv. All these are the fruit of Yushchenko's education. The former guarantor has caused many Ukrainians a mental shift that would take a long time to cure. "