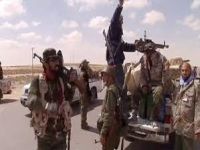 Indiscriminate wanton acts of mass murder and terrorism, the latest disgusting display of callous disregard for human life by NATO and more blood on the hands of its war criminal leaders Cameron, Sarkozy, Obama - chilling reminders of the cold-blooded reptilian evil which mingles among the leadership of nations in the international community.

While the international media continues to spin the lie that the Libyan authorities are attacking unarmed civilians (see the photo), NATO continues to spend millions upon millions upon millions of dollars of taxpayers' money (50,000 dollars per aircraft per hour times thousands of missions) on indiscriminate acts of terrorism against civilian structures. One of these was the Libyan Downs Syndrome headquarters, another was a room in which three of Colonel Al-Qathafi's grandchildren were slaughtered, along with one of his sons.

War crimes, and crimes against humanity, as NATO protects terrorists (see the photo) and acting against the UN Charter, hinders the authorities from dealing with an armed insurrection. The latest reports are of a strike on a guesthouse in Berqia, where 16 civilians were murdered by NATO bombs and a further 40 civilians were injured. The one killing civilians and children is NATO.

It is by now obvious that NATO has become desperate in its attempt to murder Colonel Gaddafy. One wonders how NATO and its leaders would react if an attempt were made to take their lives or target their children as they have done to the leader who inherited the poorest country in the world and turned it into the most prosperous in Africa and who has done so much for his continent, so much in fact that he was to be awarded a UN humanitarian prize in March...for his excellent humanitarian record.

Along come the axis of evil, Cameron, Sarkozy and Obama, all of them with awful popularity ratings at home, around them close the weapons and energy lobbies proposing a nice cozy and easy war, bombing targets in some country without defences from 30,000 feet like the cowards they are and lo and behold! Job contracts start to open up, the oil starts to flow and hey, Libya is a better place? No, it most certainly isn't. They want to give it to a clique of marauding armed Islamist fanatics.

Would that Obama, Cameron and Sarkozy did half as much in their countries as Gaddafy has done in Libya. Do they provide free health services? Free education? Free housing? Heavily subsidised food? On the other hand does Gaddafy sponsor armed terrorists in their countries? No he does not, he was the first world leader to issue an arrest warrant against bin Laden and Al-Qaeda, while the USA was cavorting with him as indeed NATO once again cavorts with Islamist terrorists from Benghazi, the same ones whose leader was arrested for working with Al-Qaeda against the American and British troops in Afghanistan and Iraq.

How interesting it is that the bought media keeps repeating their lies about Libyan authorities attacking civilians and NATO keeps committing war crimes, attacking civilian targets and destroying evidence against the corrupt TNC leaders as they did on Monday night when a State archive building was bombed to remove evidence collected against them.

If there is a right and a wrong, this will rebound in NATO's face as indeed it must. Those who respect international law should demand a stop to this act of aggression and now and a writ should be issued for the arrest of war criminals Cameron, Sarkozy and Obama.

Facebook site against the criminal NATO invasion and war crimes: