The imams were killed in a NATO bombing in the city of Brega (east), in an attack which also injured about 50 people 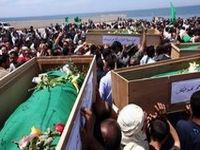 On Saturday, Libya buried the 11 imams (spiritual leaders of Islam) that were killed in an attack by the imperialist forces of the North Atlantic Treaty Organization (NATO) on Friday afternoon. While the imams were being buried, planes of the Atlantic bloc, which issued a statement of "apology" for the massacre, broke the sound barrier.

The imams were killed in a NATO bombing in the city of Brega (east), which also injured about 50 people. After the attack, the Libyan government spokesman, Ibrahim Musa, said in a news conference that five of the injured are in critical condition.

Subsequently, the block also issued a statement in which they said that "We are aware of claims about civilian casualties in the bombing. We mourn the death of innocent civilians when they occur," the statement said.

TeleSUR's special envoy to Libya, Rolando Segura, endorsed the publication of the document and informed by means of the social network, Twitter, that during the funeral ceremonies, NATO broke the sound barrier with the overflight of several aircraft (causing loud sonic booms) and disrespected the silence that is customary in Islamic funerals.

The intense bombardment conducted by NATO since mid-March that has left more than 200 dead and an unknown number of casualties, has been criticized by several international players calling for a cease-fire for the protection of the lives of innocent civilians.

Barbaric NATO naval shelling Red Crescent centre targets in Misrata, where medics and nurses wearing uniforms and Red Crescent insignia were attending to wounded people with blood stains on their legs. The building was clearly marked as that of a Red Crescent Society. Many residents were forced to flee their houses as a result of the shelling.

Despite countless appeals, the internal situation in the North African country, where a group of terrorist rebels, backed by foreign forces fighting the government, has kept the country submerged in ceaseless attacks.

While NATO claims the bombings have not targeted residential areas, Tripoli University, hospitals, government buildings and national television antennas have been attacked.

Despite the attacks, most people still support Gaddafi, who on Friday issued a message to the people assuring them that the onslaught of the imperialist coalition "will not be able" to murder him.

"The attacks by NATO (North Atlantic Treaty Organization) will not kill me because I'm with the people," said the leader in a communication, disclosed after speculations made by the Italian foreign minister, Franco Frattini, claiming that Gaddafi was injured.

The leader also offered his condolences for the civilians murdered. His Government spokesman, Musa Ibrahim, pointed out that: "Libya is once again a victim of the cowardly attacks by NATO with missiles paid for by Qatar and UAE (United Arab Emirates) (... ) they have severed all relations with Islam and Arabism."

Before the violence, Gaddafi has repeatedly stated on diverse occasions the request to resolve the conflict through dialogue, but NATO refuses to stop the bombing.