Russia refuses to cooperate with the West on Syria

Russia warns of foreign intervention against Syria and that the Syrian opposition "wants to stop the process of dialogue," says Foreign Minister of Russia. 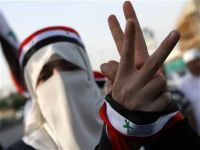 Foreign Minister Sergey Lavrov on Friday rejected the possibility of foreign intervention in Syria by NATO to stop the alleged attacks by the government against the demonstrations. The Russian official warned that "the Libyan script" could be replicated in this Arab country.

Lavrov exhorted the opponents of President Assad not to repeat the situation in Libya and hopes "that this script, with foreign players interfering in the situation, even with the use of force does not repeat itself."

The Russian Foreign Minister expressed his concern "about the fact that the reconciliation process, the dialogue process is being hampered."

The Syrian opposition "wants to stop the process of dialogue in order to appeal to foreign forces that support their actions," Lavrov stressed.

According to Lavrov, the western operation against the government of Libyan leader Muammar Gaddafi can stimulate and encourage opponents in other countries where rioters or terrorists formenting social unrest request foreign military intervention.

The Russian executive, who has expressed his rejection of the recent military intervention led by the North Atlantic Treaty Organization (NATO) against Libya, refuses to cooperate with the West in an attempt to pressure the Syrian government.

Russia, a permanent member of the Security Council of the United Nations (UN), failed last March 17 to exercise their right of veto on Resolution 1973 which authorized an imperialist attack on Libya to "protect" the Libyan civilian population from alleged attacks by Gaddafi's forces.

On Monday, the European Union (EU) approved an initial package of sanctions against Syria, including the seizure of weapons and material that could be used for "repression of the population" as well as a freeze on assets and the combined suspension of visas for 13 senior government officials in Damascus.

Since last March 15, Syria has been the scene of protests in favor and against the Executive. In response to the demands of the people of Syria, President Assad has made several political reforms such as the suspension of the emergency law, in force since 1963, the release of political prisoners and the renewal of the government.