Bandera busted back to cheap criminal 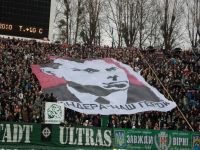 The famous Nazi collaborator, Stepan Bandera, once declared a "Hero of Ukraine" during the government of Yushchenko, the same as the much touted "Holodomor" had his title revoked by the Ukrainian judiciary, as reported in The New York Times1.

Although the German tyrant Adolf Hitler considered the Slavs as uttermensch (inferior race), he and his gang of Nazi collaborators saw as an important element in the policy of racial elimination to use Jews against Jews through armed detachments called Kapos, responsible for maintaining repression in the ghettos and concentration camps.

In this way, while invading Ukraine, the Nazis used movements whose roots were born in western Ukraine, formerly under Polish rule, which came to be incorporated into the USSR only in 1939. It is noteworthy that, ironically, names such as Stepan Bandera, previously a prisoner of Polish justice, was freed by the Soviets, since the laws of the USSR did not recognize the right of the then extinct Polish State.

With the invasion of German fascists, the movement known as the Organization of Ukrainian Nationalists - Ukrainian Liberation Army (OUN-UPA), actually a pseudonym for the Nazi organization, together with the organization of a similar name with Andrei Melnik, acted as a pit bull for Hitler in Ukraine, promoting atrocities against the local population who did not adhere to their movement, mostly non-combatant civilians.

Collaborationist activities of this organization of thugs and criminals have been documented by the U.S. Army in at least nine intelligence files, reported by Jewish survivors, including the famous diary of Rudi Weiss. They were condemned both by Polish and Soviets, and was still fought against by the latter. Although the People's Commissariat of Internal Affairs (NKVD) succeeded in dismantling the Bandera organization after World War II, Stepan Bandera was able to flee to West Germany, that country being a vassal of the United States, which granted asylum to many Nazi war criminals.

According to Ukrainian Professor Vladimir Herasymchuk, all collaborator government officials in Ukraine were installed by the German fascists. Bandera himself received his own official stick in just the same manner. The Nazi collaborator claimed that "our authority must be terrible." He recommended killing everyone who got in his way or that of his regime. According to an article by Olexa Panasenko, from the newspaper Tovarisch, "those who would not comply with orders of the Ukrainian nationalists, the Security Detachment of OUN / UPA, not only received between 30 to 50 lashes, but they ended up physically dead.

This is why Sidor K. Oniskovets, living in the village of Innje, Sernetsky region, declined to join the UPA. First they killed him in front of his children with an ax. Then they killed four members of his family. Then finally they killed his two year old son, Ivan, for the "glory of Ukraine" and they cut his leg and wrote his name on a wall: "For an act of treason against Ukraine."

In an effort to rewrite history, the administration of Viktor Yushchenko hailed figures like Ivan Mazepa, Stepan Bandera and Roman Shuhkevich, known collaborators with the invader (the first collaborated with the Swedes, when King Charles XII invaded the Russia of Peter the Great while the second became a commander of the Waffen SS Galizen3). The rehabilitation of this kind of criminal made Ukraine become one of the countries to promote revisionism and the rehabilitation of Nazism, along with Estonia and Latvia, a move denounced by several activists of human rights groups, associations of veterans, historians and other Ukrainian citizens. 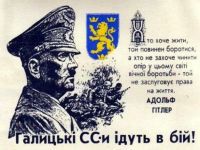 On the Ukrainian collaborationist movement fall many complaints about serious crimes, such as "ethnic cleansing" of Jews. According to the Belarusian documentary "The shameful truth about Hatin" Ukrainian Nazi collaborators were responsible for one of the most horrific episodes of the Great Patriotic War, the massacre of Hatin, Belarus, whose entire population was burned alive inside a church, including women and children. The incident is dramatized in the classic movie "Idi i smotri" (Go and see). Until recently, it was believed it was the exclusive work of the Germans.

The KGB succeeded in executing the death sentence for the criminal Stepan Bandera, who killed millions of his own people. As in the former West Germany, it is important that after this step toward democracy, the people of Ukraine press the current government of Ukraine so that it can eradicate all sorts of revisionist and neo-Nazi movements in the country with names like Ludmila Pavychenko and Timoshenko (not to be confused with the former pro-imperialist Prime Minister of Ukraine), as well as to expose and unmask in an official capacity the large farce of the "Holodomor."

1 - Levy, Clifford J. 'Hero of Ukraine' Award to Partizan leader is revoked. Article from The New York Times. In http://www.nytimes.com/2011/01/13/world/europe/13ukraine.html?_r=1&scp=1&sq=Hero% 20of% & st = cse 20ukraine
2 - HERASYMCHUK, Vladimir. At the National Rehabilitation to fascism. Article in Northstar Compass. In http://www.northstarcompass.org/nsc0203/herasym.htm
3 - Arm of the Waffen SS, the mosy extreme Nazi terrorist organization formed. To belong to this organization, it was necessary to have the ascendancy of "pure German blood" at least until the eighteenth century, recruiting collaborator elements in occupied countries. These detachments were often formed by infiltrated elements formed in Nazi Germany, as well as the marginal, defectors and former expropriated kulaks. Many of its members were obliged to serve in the OUN-UPA or the Waffen SS Galizen to act as policemen in the Nazi occupied territories.