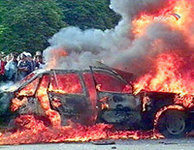 The U.S. Department of State has once again warned American citizens about the danger "of terrorist attacks and civil unrest in Uzbekistan." The notification circulated by the foreign ministry said that Washington "continues to receive information indicating that terrorist groups may be planning attacks against U.S. interests in Uzbekistan."

First and foremost, the source of threat is defined as Al-Qaeda fostered by the Americans during the Soviet presence in Afghanistan, as well as its allies, such as the Islamic Movement of Uzbekistan, Islamic Jihad Union and the East Turkistan Islamic Movement.

The most interesting thing is that U.S. diplomats have openly accused of growing hostility towards the U.S. "the Uzbek authorities, who are taking aggressive steps to ensure safety. This may cause the terrorists and their supporters to look for more accessible targets." For example, the "facilities where the Americans gather." These include the residential sector, clubs, restaurants, religious shrines, schools, and hotels.

The U.S. Department of State officially recommended American citizens to become spies or banal informers "to report to local authorities and the U.S. Embassy in Tashkent any suspicious activity."

What does this keen interest of the U.S. in the distant Uzbekistan mean? Is this the evidence of the events similar to those we witnessed in 2005 in Andijan? Chairman of the Islamic Committee of Russia Heydar Jemal answered these and other questions in an interview with Pravda.ru.

"This is just another confirmation that the U.S. is planning a major event in Central Asia. In other words, sometime in the fall we can expect a transfer of the "Arab street" to a strategic, for the States, region between Russia, Iran, China and the Afghan-Pakistan. And it is not so much about the oil, gas or uranium, but about the desire of Washington to organize a "controlled chaos" around the world. If serious unrest in the region starts, it cannot but affect the surrounding areas."

"It would seem that Karimov has now become much more agreeable. At least, he has allowed NATO to lease military bases that supply the coalition forces in Afghanistan."

"It absolutely does not mean anything. The events illustrate how Americans treat their lackeys. In his time it was Saddam Husseinn who fought for the American interests in Iran and ended up in a halter. That was Mubarak, who remained faithful until the end. Not without the approval of the States he was overthrown, and his fate is a big question. Or Milosevic, whose mentor was the notorious Mr. Holbrooke, and who dutifully followed all the orders of the latter in the early and mid-1990's, but who ended his life under mysterious circumstances in a prison cell.

There are numerous examples of America changing its own lackeys. Compared to them, Karimov does not seem the most odious. The States will not have the slightest doubt with regard to his possible replacement.'

"Why is this happening? Would it be easier to control the world under the old scheme, through the obedient satellites?"

"Apparently, the times of large and small Samos for America are over. After all, what does this mean? You have to pay for the loyalty of your vassals, and pay big. The more countries - the more sponsorships. The sponsorship of Mubarak amounted to billions of dollars. And if earlier it was applicable, now, in a difficult situation in the States, there is a fundamental review of all previous strategies.

"How has the current financial crisis affected the American elite?"

"Here, rather, we should talk about another, far more meaningful concept. The U.S. is now facing a threat of losing its position of the world hegemon. There is a fear that eventually it will cease to be the control center of the world empire with all the ensuing consequences. After all, in fact, the U.S. considered itself a sort of the Twelfth Rome, the center of civilization in the middle of the vast sea of ​​barbarians. To keep the former influence, they are implementing the concept of the "controlled chaos".

After all, what is the end result? The war of all against all where everyone is pulling each other's hair. In this stormy barbaric sea they see themselves as sort of a rock unaffected by waves, a sort of oasis of stability in the middle of turmoil, conflict and civil wars.

In fact, they remember the lessons of the First and Second World Wars in which America enriched and grew stronger. Until very late in the game the Americans did not engage in a decisive battle against Germany, preferring to profit from trading operations with weapons and food supplies. They entered the battle only in order to arrogate the victory obtained by somebody else's hands. All participants in the World Wars came out of them with a devastated economy while the U.S. economy, by contrast, grew rich on the supplies."

"It depends on how long these events will last. If they last for three years, then the U.S. can wait it out. However, apparently, their calculations are incorrect. As we know, it is easier to ignite a conflict than to stop it. In addition, it is difficult to keep chaos under control for a long time .

It is unlikely that this venture will yield the expected results. After all, modern people are not barbarians of two millennia ago. In addition, any such imperial Rome was doomed to fall. In such circumstances, there is a threat of extinction of markets, as well as the impact zone for a long time."

"How come the Americans are not able to predict this?"

"They know what awaits them. In the long term - the decline of living standards by 60 percent compared with the existing ones. Of course, few of the U.S. residents are ready for this. However, the elite to contend with the growing discontent is being prepared.

It is no coincidence that now there is a raging controversy between Obama and the Republicans on the topic: "Whose bodies will be used to plug holes in the budget?" Obama proposes to do this by increasing taxes for the wealthy. The Republicans disagreed. They propose to shift the burden to the ordinary Americans.

If we continue the theme of Rome, it seems that the U.S. may expect Cesar dictatorship of our time through the civil conflict. Otherwise the government is no longer possible. It is no accident that recently there have been several developments that speak for themselves."

"What exactly do you mean?"

"Take, for example, the recent demonstration of the infamous Sarah Palin who showed the shooting at the opponent Congress-woman and gained popularity after that among millions of Americans. It seems to be a strange case for the American democracy. However, this is another proof of the state of division and instability of the American public.

Or other unusual occurrence for the American reality: a recent seizure by thousands of protesters of the Capitol building in Wisconsin - as well similar attempts of trade unions in two other states. This is a clear challenge to the power and disagreement with the existing order of things.

And finally, to this we must add the aggravation of ethnic and racial conflicts. The black president by his actions instigates a growing hatred of the white lower class, the so-called "blue collar". Obama's statements about the cult of weapons and church as well as contempt for women and culture among them caused particular resentment. In response, he gets indignant statements: "The Islamism despises the white!"

Under these conditions, the extreme right are ready to implement the Cesar script in the spirit "in these circumstances, we cannot support the constitutional order." In other words, in this situation, they remember the Soviet times, when an alternative administration in case of war was prepared. In other words, the force control or in fact the military-police regime in its pure form will be engaged.

The first really big steps in this direction were made after the events of September 11, 2001. At that time a number of acts were adopted. For example, the "Patriot Act" and others, according to which the Constitution with its numerous citizens' rights was virtually annulled. Consider, for example, permission to wiretap, conduct searches without witnesses, etc. In comparison with this the Soviet Union is a model of democracy."

"Can everyone agree with such a scenario?"

"Of course, not. The Cesar option appeals to the Republicans and the right Democrats. In that sense, the union of Gates and Clinton is not something supernatural. The left Democrats are opposed, they see a way out in derailing the dollar and switching to the management of the IMF. However, they increasingly are in the minority. Thus, the script of the right is becoming more likely.

"What is the reaction of Obama?"

"Obama in this situation not only continues the line of his predecessor George Bush, but altogether develops it. Consider his actions against Mubarak and Gaddafi. The Uzbek Karimov is only one card in the Americans' big game."