Belarus's Lukashenko shows his teeth to Ukraine and EU 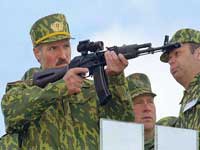 A large diplomatic scandal erupted between Belarus, Ukraine and the EU. Alexander Lukashenko pointedly did not attend the 25th anniversary of the Chernobyl disaster and did not spare harsh words addressed to the Ukrainian authorities and the EU leadership.

On April 26, a ceremony of remembrance of victims of the Chernobyl tragedy was held north of Kiev region. It was attended by Dmitry Medvedev and Viktor Yanukovych. Alexander Lukashenko was supposed to be there as well, which would be quite logical given that Belarus was affected by the radiation the most. However, he did not show up. The reason is the events that occurred in Kiev a week earlier.

On April 19, a conference was held in the Ukrainian capital on the future of the Chernobyl NPP. Ukraine has asked for over half a billion euros to resolve the issue with the sarcophagus to the infamous power unit. The EU, whose members were to arrive in the Ukrainian capital, was supposed to be the lender. Then a scandal broke out.

According to some sources, European Commission President Jose Manuel Barroso refused to come to Kiev if Lukashenko were to participate in the conference. Lukashenko was invited by the Ukrainian government. Is it unclear whether this is true. A week later Brussels made it clear that Barroso did not put forward such a requirement. In any case, Barroso went to Kiev, made a speech, and European countries have allocated money to Ukraine for the sarcophagus.

Yet, the Belarusian President did not receive the invitation. It looks like Lukashenko assumed that in order not to irritate Mr. Barroso, Mr. Yanukovich has decided not to invite Lukashenko. As a result, Lukashenko was offended by the Ukrainians and the Europeans. Instead of coming to the Chernobyl event, he arrived at the region of his country bordering with Ukraine and attacked the neighbor to the south and the European Union with harsh criticism.

Lukashenko was asked why he did not go to Chernobyl. It turned out that it has nothing to do with Russia (as many thought after last year's scandals), but has to do with Ukraine. "Ask Yanukovych that question -- why was the Belarusian president not at these events? You should ask them," Lukashenko said. "Unfortunately the current leadership of Ukraine is a lousy one."

He had even harsher words for the reluctance (real or imaginary) of Barroso to share the Chernobyl conference with him. "On the subjects of [bastards] like Barroso and others -- who is Barroso anyway?" the Belarusian leader asked. "There was a Barroso in Portugal. But they kicked him out and put him to work in the European Commission." According to the Belarusian President, the anniversary of the Chernobyl tragedy is sacred for him. "These days I usually visit the Chernobyl zone. If I stop coming here, people will be confused. I have seen with my own eyes what needs to be done here," said Lukashenko.

The reaction of the Ukrainian Foreign Ministry was predictably harsh. It expressed extreme dissatisfaction with the fact that the Belarusian leader has refused to come to the Chernobyl event. According to Ukrainian diplomats, the tragedy that happened 25 years ago unites three friendly and allied peoples - Ukrainians, Belarusians and Russians. They expressed that it was unacceptable to engage in political speculations on this matter.

"These were the considerations of the president of Ukraine when he was inviting his colleagues - presidents of Russia and Belarus - to honor the memory of those killed in the explosion at the Chernobyl nuclear power plant together, on the day of the major technological catastrophe in human history. On this day all fights and mutual claims look like dancing on the bones, and unprecedented comments of President Alexander Lukashenko cause resentment even more so," stated the Ukrainian Foreign Ministry.

"The Ukrainian state, the Ukrainian people are adamant in their warm, friendly attitude to the Belarusian people. On the day of memory of the victims of the tragedy of Chernobyl, we share the pain of our neighbors, just as they, no doubt, share ours. Hopefully, the leadership of Belarus is responsible enough to their own nationals to return to a constructive policy of cooperation with Ukraine and the EU who wish to see it prosperous, democratic and successful," the Ukrainian diplomats stated.

An independent Ukrainian political analyst, editor in chief of "Kiev Telegraph" Vladimir Skachko commented on Chernobyl demarche of Lukashenko and a harsh response of the Ukrainian Foreign Ministry:

"In this case, we should set the clashes between Belarus and the EU aside. Lukashenko did not arrive at Chernobyl event on purpose, and this is a real challenge. Obviously, he launched some new political fuss in the Ukrainian direction. Two years ago he was negotiating with Ukraine about anti-Russian alliance on the issue of transit of oil and gas.

What he wants now is anyone's guess. Perhaps he was dissatisfied with Mr. Yanukovich who is not in a hurry to welcome Ukraine into the Customs Union with Belarus, Russia and Kazakhstan. Perhaps he somehow tried to please whether Dmitry Medvedev, or Vladimir Putin, or the Russian leadership all at once.

Behaving in this way, Lukashenko was rude towards the people affected by the Chernobyl disaster. The reaction of the Ukrainian Foreign Ministry was correct - you cannot conduct political calculations on such a sad day, on this day you cannot engage in fights with the EU or somebody else. By not showing up he just insulted a lot of Ukrainians.

Of course, Belarus can say that 25 years ago it suffered more because the wind was blowing in its direction. But it was the wind, and the Ukrainians in no way offended the Belarusians. Chernobyl is a common pain of three fraternal East Slavic peoples. The three presidents were supposed to bow to the victims of the tragedy. Unfortunately, Lukashenko has been guided by other motives."