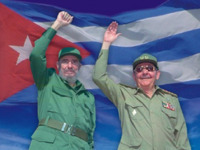 The congress of the ruling Communist Party is being held in Cuba for the first time in 14 years. It was opened with the address of virtual head of state Raul Castro. In his speech he announced major upcoming changes. However, as the leader assured, "there will never be the "shock therapy" in Cuba under socialism and "the revolution will not leave anyone without support."

Raul Castro intends to abandon the rationing system that two generations of Cubans were accustomed to, but that turned into a" very heavy burden for the economy." The Cuban leader stressed that this will not happen immediately, without a significant increase in food production. In addition, the people should prepare for new realities.

However, the changes are much greater than a simple abandonment of the rationing system. According to Raul Castro, several bills are currently being prepared that would significantly change the Cuban economic model. He is talking about expanding the private sector, which must be "a contributing factor to the development of socialism in Cuba."

Therefore, from now on in Cuba one can buy and sell homes and cars, and employees of the private sector can borrow from the state banks to grow their businesses. After all, now owning a barbershop or a restaurant not only ceases to be a prosecuted activity, but is encouraged by the state financially.

Another suggestion of Castro is to implement he decentralization of the economy, which should take place "subject to good order and discipline and with the participation of workers." According to the Comandante, the leading role will be given to planning as a socialist control measure. The present tendencies in the market will not be ignored, which will contribute to the flexibility and constant updating of the plan.

The political system is also expected to undergo drastic restructuring. "We came to a decision that is in our interests to limit the presence of senior officials in office to two consecutive terms of five years long," said Raul Castro. That is, the future leaders of Cuba will rule the island for no more than ten years.

These sweeping statements did not go unnoticed by the general public. However, there are different opinions on Raul Castro's speech. They range from the opinion that the official Havana intends to implement the "NEP Cuban style" to the possibility of a gradual dismantling of the "inefficient socialism" and transition to the capitalist track.

Vadim Teperman, Director of the Center for Economic Studies with the Institute of Latin American Sciences, shared his position on the changes taking place in Cuba in an interview with Pravda.ru:

"This is not the dismantling of the socialist system, but an attempt to save socialism by eliminating the weaknesses in the Cuban political system and economy. In this regard, the Cuban authorities really intend to implement deep and complex reform, the essence of which is to abandon the total dominance of the public sector. In other words, the official Havana intends to abandon the postulate of 1968, according to which there was no place for private business in Cuba."

"However, this circumstance is being used as proof that Raul opted for "perestroika" Cuban style."

"This does not mean that Cuba will choose the Russian way. The abandonment of the dominance of the public sector does not mean that the socialist model will be abandoned. On the contrary, the current Cuban leadership plans to modernize it through the reforms, taking into account international experience. It is no accident that Raul drew attention to the fact that "shock therapy" should not be expected. This means that the privatization of the public sector will not happen.

"The public sector will be significantly reduced. This year alone, according to this plan, half a million Cubans will be let go from the public sector and are expected to be in demand in the private sector. Private businesses will be created virtually from scratch. We are talking about small and medium businesses. Those willing to start their own businesses will receive government assistance. However, key sectors of the economy will stay in the hands of the government.

"Will Cuba get rid of the rationing system?"

"This process is already underway. Several years ago, bread appeared in open sale. However, this is a gradual process. It is impossible to momentarily abandon the system the country has been using for decades. Every year the volume of bread sold in the market only increases. This is also observed for other foods and goods. For example, last year, toothpaste and soap were already freely available. Sugar is next on the list. Now people can receive more using rationing cards than ever before, and not far is the day when the rationing system will be abandoned altogether."

"What changes are expected in real estate?"

"The tendency to lease out land that emerged in late 2008 will be continued. We are talking first and foremost about positive change in agriculture. Now one can lease the farmland for a period of ten years with an extension for another ten years. These measures are already beginning to show effect. In particular, less than in three years the country has leased 1.8 million acres of land, and the lands are being worked at. These lands are not intended for private ownership to prevent them from being bought by large owners, which is a frequent issue in other countries of the region.

"How far is Raul Castro willing to go? His brother Fidel made a similar but unsuccessful attempt in the early 1990s".

"Havana has been harboring plans to reform the country for many years. However, the government acted with caution, fearing the negative effects that accompanied the Russian reforms. Now the mechanism is already running, and the plans of the Cuban leadership will not be revised. The following numbers say how much things have changed in less than 20 years: in the early 1990s only 168,000 permits for business licenses were issued, and now, less than in six months - nearly 200,000.

"What is the Cuban model?"

"It is a socialist model, but softer than it is now. In fact, when viewed simplistically, Cuba conditionally abandons the rigid Soviet system in favor of the similarity to the Hungarian and Yugoslav Model of 1980, or to be precise, the Vietnamese or Chinese model. The Cuban leadership has spent a great deal of time trying to learn the most appropriate model for the radical changes and chose the models that were used in Vietnam and China. The Cuban press openly states the following: "They (the Vietnamese and Chinese) are not afraid of liberalization, and we are not afraid of it either, because this process will be under control. But, given our conditions, we can implement it even better."