Libya and the Law 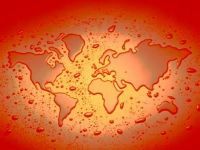 Since the Treaty of Westphalia in 1648, Mankind has been trying to forge something called international law and binding agreements covering the respect for internationally recognised precepts of sovereignty. This is why, after the outrage of Iraq, it is important to respect the UN Resolutions regarding Libya.

Either the world has two weights and two measures governing international crisis management, in which case we may conclude that international law does not exist, or else it comes together around a collective legal entity - as indeed it did when the United Nations Charter was set up and signed in 1945.

UN Security Council Resolutions 1970 (2011) and 1973 (2011) stipulate clearly that there are no be no foreign troops in Libya and also that there is to be no military intervention - including training - whatsoever.

The wording of Paragraph 9 is as follows:

"9. Decides that all Member States shall immediately take the necessary measures to prevent the direct or indirect supply, sale or transfer to the Libyan Arab Jamahiriya, from or through their territories or by their nationals, or using their flag vessels or aircraft, of arms and related materiel of all types, including weapons and ammunition, military vehicles and equipment, paramilitary equipment, and spare parts for the aforementioned, and technical assistance, training, financial or other assistance, related to military activities or the provision, maintenance or use of any arms and related materiel, including the provision of armed mercenary personnel whether or not originating in their territories..."

Article 51 of the UN Charter, meanwhile, defends the right of States to defend themselves against attack, and this includes armed insurrection, especially when it is fostered, aided, abetted and financed from abroad.

Which part of these laws, then, does William Jefferson Hague, the former leader of the British Tories and now Foreign Secretary, fail to grasp?

Why then if as per Article 9 of UNSC Resolution 1970 (2011) "technical assistance, training, financial or other assistance, related to military activities" is forbidden, does this British gentleman propose to send military officers to the home of the Benghazi-based terrorists (the ones who fought against British troops in Afghanistan and who supplied most of the suicide bombers to Iraq), to provide logistics and training?

William Hague has long been accused of speaking from the parts of his body which others find repugnant, except the odd "special advisor" - and his claim that such training would be compatible with the UN Resolutions means that he is a) stupid b) a liar or c) incompetent. How about all three?

How about calling a spade, a spade, and saying that this disgusting little protagonist is aiding terrorists who fought against his own country simply because Muammar Al-Qathafi has cheesed off a substantial number of bankers and fat cats who his humanitarian policies across Africa have excluded them from billions of dollars in profits?

And what would Hague's cut be in this?