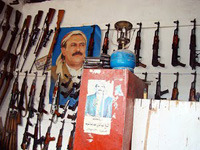 The dramatic events that have been unfolding recently across the Middle East and North Africa showed that the ambitions of France, Germany, the UK and Italy do not let these formerly sworn enemies and currently staunch allies stay away from the wars and conflicts in Iraq, Afghanistan, Sudan and Libya.

The USA has been playing the leading role in the campaign against international terrorism since 2002. However, the considerable losses, which the country suffered in Iraq and Afghanistan, made the Americans cut their military presence in the region. NATO is now conducting defense operations in three countries simultaneously - Afghanistan, Iraq and Libya.

In the meantime, arms deliveries from the West affected all hotspots of the Middle East. The subject of arms exports has become particularly important against the background of attempts to provide military equipment and ammo to Libyan and Ivorian "fighters for democracy."

Several years prior to the start of the civil war in Libya, Germany and France resumed defense shipments to this oil-rich African country. Practically all UN sanctions against Gaddafi's regime had been withdrawn by that time. In 2004, German Chancellor Gerhard Schroeder visited Libya for the first time. Schroeder signed a package of important agreements on economic cooperation between the two countries. Large contracts for the delivery of military hardware were signed from 2005 to 2009. Helicopters, army vehicles, communication systems and radars have been delivered to Libya during the recent five years.

The UK also played a very important role in supplying Libya with state-of-the-art defense technologies. Britain had supplied arms worth 100 million euro to Gaddafi shortly before the beginning of the civil war, Der Spiegel wrote. It is worthy of note that England has recently sold small arms and bulletproof vests to Yemen. Prince Andrew visited Yemen in 2009 to discuss the matter with President Saleh. Afterwards, governmental troops used British rifles to suppress riots in the country.

The list of arms suppliers for Arab dictators includes other European countries as well. Italy sold a large batch of defense helicopters to Libya in 2009. Most likely, Gaddafi also purchased Israeli weapons through agents. According to The Jerusalem Post, the scandal started after Libyan rebels demonstrated the captured Israeli hardware.

The Soviet arms of the Libyan army are mostly outdated. Libya was planning to buy state-of-the-art hardware from Russia, but the shipments were eventually minimized. The agreements concluded before the start of revolutionary events had to be canceled.

Germany and France have been delivering arms to many troubled countries of the Middle East during the recent decade. The arms produced in Germany would very often come into possessions of extremist organizations. In Afghanistan, for example, the Talibs obtained German machine guns and assault rifles R-93 and G3. It is impossible to explain how the Talibs received the German small arms. It is possible, though, that a part of those guns was delivered to Afghanistan via Turkey. The latter received a batch of outdated G3 rifles at the end of the 1980s.

The United States managed to make Britain and France move on the arms market after two wars in the Persian Gulf. The Pentagon currently takes considerable efforts to rearm Saudi Arabia's army, which can be used against Iran.

Even though extremists may often get hold of Western arms, it seems that the USA and the EU are not going to change their approaches to the arms exports issue. At the end of the day, no one knows which forces the Libyan "fighters for democracy" represent.

However, the USA, England and France, which interfered in the Libyan conflict, will easily be able to do it again, against another "disagreeable" regime.