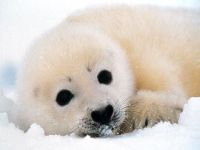 What do they do for fun in Canada? Year after year after year, teams of hate-filled psychopaths go out on the ice armed with clubs and hakapics, find defenceless baby seals and hack them to death, or worse - throw them half-dead into boats as they pile carcass upon carcass on top of them. Oh, and then they skin them alive.

What do they do for fun in Canada? Get drunk and pretend they are a radio hack? Launch hate sites on the internet? Take drugs and play ice hockey? Why no! They go out and club baby seals to death! Year after year after year, teams of hate-filled psychopaths go out on the ice armed with clubs and hakapics, find defenceless baby seals and hack them to death, or worse - throw them half-dead into boats as they pile carcass upon carcass on top of them. Oh - and then they skin them alive. 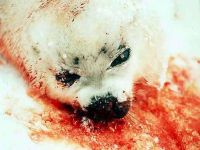 Indeed, where are the authorities while these disgusting actions are going on? Where are the vessels from the Canadian Department of Fisheries and Oceans? Where are the authorities to enforce the terms of the Canadian Marine Mammal Regulations? For example, Article 33.1, which stipulates that "Every person who fishes for seals for personal or commercial use shall land the pelt or the carcass of the seal". Why, then, are the baby seals, many of them still alive, left to die on the ice after they have been skinned? 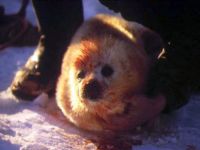 Right now, the team from IFAW - International Fund for Animal Welfare - is in Canada documenting this study in cruelty. It is difficult to imagine how any human being this side of the pathological line dividing sane people from psychopaths could even begin to imagine the shocking acts of butchery taking place, let alone actually perpetrating them.

Video: "This bloodied and suffering seal pup waved its flipper over and over as the sealers continued piling hunted seals on the boat."

"Baby seals just a few weeks old are being shot at on small pans of ice, then clubbed or hooked and brought onboard the sealing ships to be skinned. Few sealers have been checking to see if the seals are unconscious before hooking or slicing them open.

Seals are also being killed for no reason - their bodies left on the ice to rot - a clear violation of Canada's Marine Mammal Regulations.

And in one horror-show case, we saw a young seal dumped in the bottom of a small boat while the sealers kept hunting and adding other bodies to the pile. The young seal - which was not checked to make sure it was unconscious - reaches up and waves its front flipper repeatedly, clearly still alive and in terrible agony." IFAW 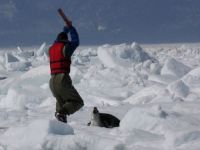 Since the Canadians are obviously unwilling or incapable of doing anything about it, then let the international community put this practice to shame and urge Canadian citizens to ask where their politicians stand on the issue, the more so because the millions of tax-earners' dollars spend on this barbaric practice do not compensate financially.

"According the Department of Fisheries and Oceans' own data, the landed value of the commercial seal hunt was only $1.3 million in 2010, with exports valued at a mere $2.1 million. Yet taxpayers will spend an estimated $10 million to challenge the European Union ban on seal products at the World Trade Organization, an estimated $1 million is spent each year on attempts to monitor the commercial hunt, and hundreds of thousands are spent annually to develop seal products and promote them overseas" (IFAW). 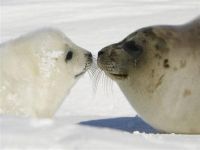 Ladies and gentlemen, welcome to the Canadian pastime, which has continued for year after year after year, with the complicity of the Canadian people and their political representatives. Hacking poor defenceless seal cubs to death, skinning them alive and leaving them to die gasping for breath, panic-stricken and terrified, lying on the ice. What a sickening bunch of perverts, deviants, psychopaths, warped, cruel and cowardly failed "men". This time, the Americans at IFAW have caught their Canadian neighbours with their pants down - and given it to them good.