Lech Kaczynski in circle of mysticism and speculations 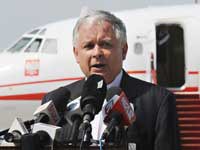 On April 10 of 2010 at Smolensk a Polish plane crashed. All 96 people aboard were killed, including President Lech Kaczynski. Over the past year much has been said about the tragedy bringing Russia and Poland together. It was said that the tone of the relations between the two countries has changed, that those at the highest level began to seriously discuss the most difficult questions of history like the Katyn case.

However, overcoming the legacy of the past is hard. Dissatisfaction with both the Russian investigation into the crash of Tu-154 and clarification of the matters of history was expressed more than once and not only by Jaroslaw Kaczynski, the Russophobian twin brother of the deceased president. Similar statements were made by the current head of Poland Bronislaw Komorowski and Prime Minister Donald Tusk - the politicians who seem to be in favor of a dialogue with Russia.

Has the catastrophe near Smolensk indeed led to a warming of Russian-Polish relations or little has changed? Political scientists Sergei Mikheyev, Alexander Dugin and Alexander Rahr shared their thoughts in an interview with Pravda.ru.

Sergei Mikheyev, general director of the Center for Political Conjuncture:

"There is no noticeable improvement in the relations between Russia and Poland. By and large we should understand that the catastrophe near Smolensk and the Katyn case, as well as many other controversial issues in bilateral relations, are nothing more than links in certain political games. Yes, on April 10 of 2010 there was an accident, but it was used for political purposes in order to accuse Russia of all mortal sins.

The fall of the Tu-154, Katyn and other episodes do not change the facts. There has been a tough geopolitical competition between Russia and Poland for many centuries, and today it did not go away. In particular this applies to post-Soviet space. In addition, Poland would like to use various episodes of its history to put pressure on Russia. This is obvious, and the Smolensk tragedy is the same thing.

The names of Russian and Polish politicians and specific episodes play no role here. The competition between Russia and Poland has only intensified with the collapse of the Soviet Union. The death of Lech Kaczynski in this sense does not change anything."

"A year ago, President Kaczynski and his companions were flying to Katyn to once again sow the seeds of Russophobia, but the plane has crashed. I wish they would stop dancing on the bones. Now statements are heard in Poland that Russians have allegedly killed their president. This is not surprising because Russophobia and attacks on Russia are an integral part of the consciousness of the Polish political elite.

Historically, we have had a very uneasy relationship. Rzeczpospolita was oppressing Russia in the middle ages; Poles were in Moscow in 1612. Then Russia has participated in dividing Poland. Hostility towards Russia is a part of Polish identity. However, Russians did not favor Poles, either. Fyodor Dostoevsky portrayed Poles in his parodies. It is impossible to once and for all cancel the history that had so many controversial issues.

Have the Russian-Polish relations changed over the past year? Perhaps, there have been fewer complaints from the other side. Yet, whether they have changed is not that important. Russian-Polish relations are an infinitely small issue in terms of geopolitics. Today's Poland is of little importance. As Sweden at Poltava has ceased to be a great power, Poland has lost its former importance. Russia still exists on the geopolitical map of the world, but Poland does not.

Relations with Western Europe, the European Union are important for us and we are building them. Poland is secondary here. Being Slavs supposedly brings us together, but belonging to Orthodoxy and Catholicism, respectively, separates our two countries. There are proponents of Slavic and Eurasian idea In Poland, but too few. There is nothing that would make us interesting for each other. "

Alexander Rahr, an expert of the German Council on Foreign Relations:

"I would not wish the tragedy Poland has survived on April 10, 2010 on any country. At the same time we have to say that Lech Kaczynski had difficult relations with both Russia and Germany. With his tragic death, a significant irritant has left the Russian-Polish and German-Polish relations, at least at the official level. Poland's foreign policy has become less ideological. President Komorowski and Prime Minister Tusk behaved perfectly in this sense.

To date, nearly all historical irritants have left the relations between Germany and Poland, though they still exist at the level of household and among some experts. And they will continue to exist. We must not forget that Germany invaded Poland, and this was the beginning of World War II. This will be a topic for conversation for another fifty years.

Difficult historic memory will exist in the relations between Poland and Russia. But I think that after the disputes of Kaczynski era when history was a weapon, after celebrating the 65 anniversary of the end of the World War Two and especially after the tragedy in Smolensk, historical disputes between Russia and Poland have become less aggravated.

There is a feeling that Poland under new leadership is becoming more European country, not a pro-American Trojan horse within the EU. This applies, in particular, to eastern policy of the EU, where Poles have sought to play a special role. In the second half of this year Poland will hold the EU Presidency, and during these six months they can get closer to very large qualitative changes in Russia's relations with the EU - up to the profound advances in the issue of visas abolition.

Several other contentious issues, such as energy, gradually become apparent in the Russian-Polish relations. In addition, under Kaczynski Poland for some reason considered itself the patron of Ukraine and to Russia it often seemed that the Poles wanted to completely sever the Ukraine from Russia. Yet today different people sit in Kiev. They are not going to wait for Warsaw to save them from Moscow. This also played a role in improving the climate of the Russian-Polish relations. "