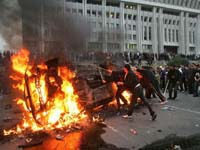 Kyrgyzstan celebrates the anniversary of the Tulip Revolution that led to the overthrow of President Kurmanbek Bakiyev. The revolution, however, did not make the anxiety in the republic subside. The political elite of the country continues to sort things out and squabble for a place under the sun. Is there future for Kyrgyzstan in this situation? Head of the Department of Central Asia and Kazakhstan of the Institute of CIS countries Andrei Grozin answered this question in an interview with Pravda.ru.

"Recently people have been saying increasingly more that Kyrgyzstan is a failed state. Do you agree?"

"I am not a supporter of alarmist ideas, and I do not think that Kyrgyzstan must necessarily cease to exist. Yes, there are problems between the North and South. There are separatist movements In the South. However, their presence does not mean that they will prevail. The South depends on the North in terms of subsidies. Therefore, the very nature of the economy prevents the breakdown of the country. An individual who will openly advocate for the collapse of the country will automatically become a political corpse.

This country existed somehow for 20 years. Just a few years ago, under Askar Akayev, there was relatively high standard of living for Central Asia in the country.

Another thing is that in any case the continued existence of this country will be very difficult, because it really has a lot of problems."
"And one of the most important ones is the lack of unity of the political elite, correct?"

"Yes. Take, for example, some of the recent debate in the Kyrgyz parliament that ended in a fight. This clearly reflects the level of the so-called political elite. Members of the parliament for the most part reflect very narrow, small-town interests. They can say "Kyrgyzstan" and mean only their own clan. Many of them are characterized by relatively unbridled nationalism. Take, for example, killing of Uzbeks that took place last summer.

One reason is that in Soviet times Moscow acted as an arbitrator, smoothed all conflicts and solved them in its own way, but would not let them flare up."

"Is there a future for the current parliamentary-presidential form of the government?"

"The choice of such a system clearly reflects moving of the Kyrgyz political elite away from the presidential form of government. Through these changes it is trying to protect itself from the appearance of another Bakiyev. However, when the country carefully considers the idea of 120 young ambitious Bakiyevs in the parliament, it will likely want to return to the presidential form of government. However, if this system lasts at least five years, there is hope that it takes root. The main thing is to make these mini-Bakiyevs realize that they will have to negotiate somehow. But it is very difficult. Ambitions of Kyrgyz politicians are wild, and each of them sees himself as the main person. Therefore, it is extremely difficult to work with them. This means we cannot rule out the possibility that by this fall, when the election occurs, no force majeure happens."

"Many of the country's problems were due to the underdeveloped economy. Is there a possibility of improving it?"

"It turns out that the economic weakness of the Kyrgyz Republic is rooted in history. Since the Bolsheviks have created Kirghiz SSR, it had been a permanent candidate for the poorest and economically underdeveloped republic of the Soviet Union along with Tajikistan. Historically, countries and governments created in the mountains do not boast strong economies.

Of course, there is some truth in the words of Kyrgyz politicians when they explain the economic problems of their country by lack of oil and gas there. But it is not so much about their absence, but the very nature of the elite in Kyrgyzstan. We cannot say there are absolutely no raw materials there. There are deposits of gas there, albeit in limited amounts.

Or take a large gold deposit Jerome. Yet, neither the gold nor gas brings tangible revenue to Kyrgyz treasury. The Kyrgyz elite simply "cuts down" all sources of money, worrying exclusively about their own pockets. The same can be said of the energy enterprises.

Now this elite is expecting money from external sources. In fact, it veers in an effort to obtain subsidies between the EU, Russia and China. But that was before the crisis. Now, however, there are no countries willing to subsidize the Kyrgyz elite for no reason. I have to say that for Russia it is unprofitable. Well, what's in it for us? The loans allocated to Kyrgyzstan are devoured by local elite with little or no hope for their return."

"What can Kyrgyzstan expect in this situation?"

"Without a doubt, there will be tough times. Currently, there is a progressive stagnation and there is no end to it. Now the external debt of Kyrgyzstan has grown so much that it would soon be equal to the national GDP. Perhaps as a result, even some external control will be imposed. Say, there will be an option in which the country enters into a pact with the global centers of power that would be monitoring the use of allocated aid. It may take six years for the situation to somehow settle. But the question is whether the Kyrgyz elite is ready to abandon the feeder.

This is the near future. With regard to medium and long-term perspective, the future of Kyrgyzstan in general looks hazy, especially considering that NATO withdrawal from Afghanistan is looming on the horizon."