Denmark: Another point of clash of civilizations 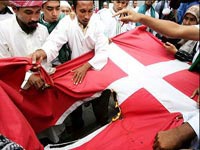 The relationship between local people and immigrants from Muslim countries became extremely acute for another European country - Denmark. The hometown of the writer Hans Christian Andersen, Odense, has recently become an arena of confrontation between the locals and immigrants.

Prime Minister of Denmark Lars Løkke Rasmussen, like David Cameron and Angela Merkel, has not yet acknowledged that the policy of multiculturalism in his country has failed. However, everything suggests that he will not be able to pretend that nothing has happened for much longer. The ghost of a "clash of civilizations" is haunting not only Odense or Copenhagen, but also distant Greenland.

Denmark in the past had no colonies in Asia or Africa, therefore the Muslim community cannot be considered the "legacy of colonialism." When in 1960 it became clear that the country needed extra hands, virtually all parties supported the idea of ​​attracting immigrants from Turkey, Pakistan and North Africa. The first ten thousand "aliens" were "digested" easily. Yet, later the situation became more complicated.

In the 1980's the situation has worsened in the Middle East. The Danes accepted many dozens of refugees from Iran, Iraq, Lebanon and Palestine on their territory. Then the government in Somalia has collapsed. Then, Muslims from Bosnia and Herzegovina and Kosovo Albanians have arrived in Denmark. Finally, several thousand of Chechens have moved into the hometown of the great storyteller. As a result, today the Muslim community consists of 200,000 people (four percent of the population, not counting the illegals).

Problems were unavoidable. On the one hand, many aspects of life of local residents apparently were not favored by Muslim immigrants. Christiania district of Copenhagen famous with its particularly frivolous morals and where you can freely buy recreational drugs is clearly not liked the devout. Prostitution and same sex marriage are legalized in Denmark as well.

However, the Danes have accumulated many complaints about the Muslims as well. Condemning frivolous nature of Scandinavians, immigrants often forget that the northerners are the ones who own the land. According to some reports, up to 40 percent of all government spending is the payment of different benefits to Muslim immigrants. However, many followers of Islam are completely unwilling to work, and the crime rate among them is many times higher than that among the Danes.

For a long time, Danish Muslims did not have a full-fledged mosque, but eventually the authorities gave the go-ahead for the construction of these buildings not only in Copenhagen but also in Odense. The capital hosts the Islamic International Bank. Imams are entitled to a simplified procedure for obtaining Danish citizenship. However, the locals are also entitled to complain of the ingratitude of the Muslims as preaching of extremist content can be heard from many houses of worship.

However, the Danish authorities and personally the former long-term Prime Minister, and now a NATO Secretary General, Anders Rasmussen Foge can be partially blamed for the fact that the problem of coexistence between Muslims and the indigenous population has become acute. In 2002, during the tragedy in Moscow at Dubrovka ("Nord-Ost"), the so-called "Chechen Congress" with participation of fugitive Akhmed Zakayev convened in Copenhagen. Fogh Rasmussen has refused to apologize to Russia, and the Danish press was filled with stories about "insurgents" in the Caucasus, suffering from "terrible Moscow.

However, flirting with the Islamists in the Caucasus did not protect Denmark from a scandal with the Muslim world. The scandal has shown the world nearly complete incompatibility of traditional Muslim and modern European values. On September 30, 2005, the Danish newspaper Jyllands Posten published cartoons depicting Prophet Muhammad. Islam is known not to favor the images of people, and especially those of the prophets. Later newspapers around Europe began to publish similar cartoons.

The Muslim community was indignant. Ambassadors from nearly 20 Islamic countries demanded a meeting with Prime Minister Anders Fogh Rasmussen, but he refused to meet with them. In addition, the head of government has added fuel to the fire saying that the cartoons were a manifestation of freedom of speech. In response, the Islamic countries began withdrawing their ambassadors from Copenhagen, organized rallies with the burning of Danish flags, initiated riots at Danish embassies and boycotts of Danish goods. Muslims considered the cartoons a mockery rather than a manifestation of freedom of speech.

This was not the end of the story. In early 2008, five Danish newspapers depicted Mohammed as a terrorist. The cartoons were a reaction to the assassination attempt on the author of the first cartoons Kurt Vestergor commited by a Muslim immigrant. In January of 2010, a Somali man with an ax tried to kill the artist again. Muffling the problem of coexistence and differences in values ​​among Danes and Muslims was no longer possible.

Denmark is one of the most peaceful countries in the world, and any murder attempt (or any major crime) here becomes news for many weeks. It is not surprising that within the last 10-12 years, People's Party has been enjoying increasingly larger popularity among the Danes. There are some things that bring the party closer to Muslims - it does not like gay marriage and many other attributes of modern European life. However, its key point is restriction of immigration from Muslim countries and the fight against the Islamic threat in general.

Unlike other similar organizations in Europe, the People's Party in Denmark until recently was run by a woman, Pia Kjærsgaard (Chersgor). Every new election in the Folketing (the Parliament of Denmark) brings the party an increased support. In 1998, seven percent of Danes gave them their votes. In 2001, 2005 and 2007, respectively, the percentage of the support grew from 12 percent to 14 percent. At the European Parliament elections two years ago the party took 15 percent of votes.

Several years ago the authorities of neighboring Sweden harshly criticized the party for its politically incorrect initiatives, such as a ban on minarets. Pia Kjærsgaard responded: "If they want to turn Stockholm, Gothenburg and Malmo into the Scandinavian Beirut, with clan wars, murder under the laws of revenge and gang rapists, let them act. We can always close the bridge across the Oresund strait."

As is obvious from the elections in the fall of last year in neighboring Sweden, the far-right Democratic Party is also gaining momentum. Its slogans are almost indistinguishable from the Danish slogans of the People's Party. Denmark's Scandinavian "sister" also has this issue. It is pointless to hide the existence of the "immigrant" issue in Northern Europe. The incompatibility of different values became apparent in Denmark more than anywhere else.