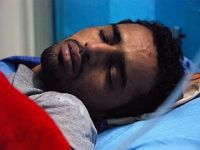 Where is the international community? Morocco illegally occupies Western Sahara, annexed in three waves since 1975. Saharawi political activist Mohamed Halab is in serious condition, 26 days into his hunger strike - and the Moroccan authorities will not even let his mother visit him.

Mohamed Halab, the young Saharawi political activist, 24, entered last night the Hospital of Rabouni after 26 days on hunger strike. The Moroccan authorities prevent him from visiting his parents and siblings who live in occupied Laayoune and prevent them from visiting him.

Rabuni, Algeria, April 2, 2011. Mohamed Halab remains interned in the National Hospital Rabouni (Saharawi refugee camps in southwestern Algeria) in a critical state of health. After 26 days of hunger strike at the base of UNHCR, the young Sahrawi is 24 hours under observation. The nurses and doctors take care of him, delivering doses of glucose.

On Monday March 28 he began vomiting and his blood sugar dropped to 50 (normal for his age is between 90 and 100), in such a situation the doctors required his transfer to medical attention urgently. In the case of not visiting a hospital, his life would have run grave danger, even to hypoglycemic coma.

Mohamed Halab, 24, began last March 7 a voluntary fast after the Moroccan refusal to benefit from the Programme of Confidence Building Measures (CBM) supported by UNHCR. The decision to undertake this action was provided by the arbitrariness of excluding him from the family visit program. This was the second time that Mohamed Halab tried to visit his parents, three brothers and a sister living in Laayoune.

The program made by the United Nations High Commissioner since 2004, aims at the reunion of families separated by the so-called Wall of Shame, of 2,500 km. This building, completed in 1986, separates the Moroccan-occupied Western Sahara, in the liberated territories and refugee camps on Algerian territory. 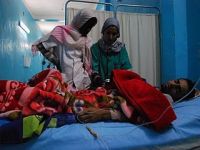 Born in the city of Laayoune in 1986, Mohamed Halab was forced to leave the occupied territory after arrests and persecution by the Moroccan government for participating in peaceful demonstrations. From the outset, Mohamed has always fought for the fulfillment of human rights and self-determination for the Saharawi people.

In 2003 he crossed the wall to reside in refugee camps where he has remained until today. Between 2005 and 2009 he settled in Libya to be professionally trained in political science. Upon his return, he joined AFRAPREDESA Council (Association of Prisoners and Missing Familares of Saharawis), and in June 2010 was elected as Communications Officer of the organization, a position he has played effectively even having begun the hunger strike.