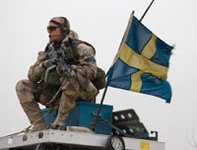 Sweden, that is not a member of NATO but a country powerful in respect of its military, is ready to join the bombing of Libya. This means increased cooperation of the Swedish with the alliance. This may negatively impact the geopolitical situation in not so much Libya as Russia.

The Swedish Foreign Minister Carl Bildt was the first one to announce the initiative of the participation of Scandinavians in the military operations against Gaddafi. This politician, who at some point was a prime minister, is known for his favorable attitude towards the cooperation of his neutral country with NATO. As it turned out, the initiative of the head of Swedish diplomacy was backed by Prime Minister Fredrik Reinfeldt.

Before a meeting with NATO Secretary General Anders Fogh Rasmussen, Reinfeldt has proposed to send eight Swedish fighters Gripen, a military transport ship "Hercules" and a scouting aircraft to Libya. The final decision on sending a Swedish aircraft to Africa must be made by the parliament. Reinfeldt is hopeful that members of the Riksdag approve his plans.

The question of participation of the Swedes in the Libyan operation of NATO may be an example of bonding "brotherhood in arms", which may be followed by Sweden's membership in NATO. This would cause a change at the very borders of Russia - the Baltic Sea and the Arctic.

For nearly 200 years, Sweden has been a neutral country. However, this neutrality lately seems declarative. Swedes (as well as non-aligned Finland) participated in NATO's Partnership for Peace. NATO forces are conducting increasingly more exercises on Swedish territory. Two years ago, Sweden and Finland have agreed with the members of the Alliance Norway, Denmark and Iceland on joint patrolling of maritime boundaries in the Arctic and creating combined Navy and a rapid response unit.

Earlier this year, at the initiative of the UK, a meeting with the British, the Baltic states and representatives of all five Nordic countries was held in London. The meeting was dedicated to the strengthening of military cooperation in the Arctic and Baltic regions. The organization has been already called the "Arctic mini-NATO". Apparently, its future shape will be discussed by the NATO secretary general and former Danish Prime Minister Rasmussen and head of the Swedish government Reinfeldt on Thursday.

There are many indicators that it will not be long before Sweden loses its neutrality and joins NATO. If this happens, the Swedes will be a beneficial acquisition for NATO rather than a burden. The alliance will obtain a new Baltic country near the Russian borders. This, however, is not the only advantage of having Sweden as a member.

This small nine-million country has a strong army and military-industrial complex for its size. Even during the Cold War, the neutral Sweden was the tenth largest exporter of weapons. Over the past 20 years it has moved up to the seventh place, selling weapons worth nearly two billion dollars. Customers of the Swedish defense industry are the Netherlands, India, Pakistan, South Africa, Latin America and even the U.S. and Britain.

The Swedish army is 25,000 people strong, but the local General Staff has developed a plan that allows it to quickly double. The Scandinavian military machine has 165 combat and 102 support aircrafts, over 50 surface ships and five submarines. It is noteworthy that the decision to build combat power in Sweden was made after the war in South Ossetia.

Sweden's participation in the bombing of Libya is a possible trial step towards membership in NATO, or at least establishing a special relationship with the alliance. How does it change the situation at the Russian borders? What kind of troubles Sweden's membership in NATO can cause Russia? Military experts Leonid Ivashov and Anatoly Tsyganok shared their thoughts with Pravda.Ru.

Leonid Ivashov, president of the Academy of Geopolitical Issues:

"I would not say that Sweden has too strong of an army, capable of solving extra-combat tasks. It thinks more about maintaining its higher status in comparison to Norway and Finland. During last decades Russia has had good cooperative relations with the Swedes. The Swedish General von Sydow was very happy that his country did not participate in the NATO aggression against Yugoslavia. This fact should be noted separately.

"However, the U.S. is carrying out an active policy of encirclement of Russia, creating a ring of military bases around us. There are bases in the Black Sea region, at our northern borders. The Americans started working with Sweden to attract it into NATO. It seems that the political decision has been made and the Swedes will be joining the North Atlantic bloc. Participation in the bombing of Libya and the creation of "Arctic mini-NATO" are steps in this direction.

"Sweden alone is unlikely to threaten Russia. However, as a part of NATO, it is much more dangerous. The Alliance is a well-honed, sophisticated American system designed to encircle Russia. In that sense, the end of the era of Swedish neutrality is not good for Russia."

Anatoly Tsyganok, head of the Center for Military Forecasting, Institute of Political and Military Analysis:

"To date, there is no consensus about the possible entry into NATO in Swedish society. Proponents point to the danger posed by Russia, the adversaries point to the costs of the membership in the alliance. However, the fact that the Swedes have been recently coordinating closely with NATO forces, and that the planes have been sent to Libya, says that the "Atlantic" vector of Swedish politics today is stronger.

"If Sweden joins the Atlantic alliance, it will create many problems for Russia both at the Baltic Sea and the Arctic. In the north, near Russian borders, a joint Swedish-Norwegian strike group will appear, theoretically able to act against our Baltic and Northern fleets. Today, NATO is increasing its presence in the Arctic. In this regard, the addition of Sweden to the alliance is a very bad signal for Russia."