Why Sarkozy went to war in Libya 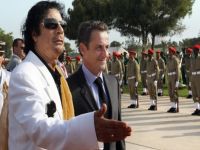 The French president spent five years as Minister of the Interior, building the image of a radical crime and immigration fighter (in areas related to people of Muslim origin). Apparently Sarkozy wants to repeat the political strategy of the 2007 campaign when he sought to follow the advice of Karl Rove (Bush strategist). Instead of just trying to build a majority, it is more effective to promote controversial issues such as immigration, identity, crime and Islam, which may provoke the fragmentation of the opposition.

Besides the oil (85% of exports) and import of arms (1 billion dollars) the issue of immigration comes up as a major concern of the European Community in relation to recent events in Libya and North Africa.

One of the words most used by European diplomats in recent days to refer to the action of Gaddafi is "unacceptable." However, in recent years, it has been perfectly acceptable for the governments of the European Community to outsource the protection of their borders to the this same "dictator."

Over three years the police apparatus of Libya was used to keep migrants away from the sacred soil of Europe. "We are extremely concerned about developments in North Africa" ​​- said a spokesman for the European Commissioner for Internal Affairs - Michele Cercone, who visited Libya last year to carry out cooperation agreements with the promise for assistance of 5 billion euros a year in exchange for the cooperation of Colonel Kadhafi who warned that "Tomorrow, maybe Europe is no longer European, but black."

Two years ago an agreement was concluded between Italy and Libya that allowed the Italian navy to intercept the boat people and return them to Libya, one of the main routes of entry into Europe because of its proximity to southern Italy. Thus, it is estimated that in 2008 more than 32,000 illegal immigrants entered Italy via Libya, and in 2009 after the agreement, only 7,000 immigrants arrived at their destination.

Those who failed to enter Europe were detained in camps in Libya showing Europe's serious discrimination and xenophobia against African immigrants. According to the Italian government, Libya has already intercepted more than 2.5 million immigrants over the past five years. Refugees who have no possibility of applying for asylum or access to any effective resource risk being forced to return to their country of origin where they may face persecution or torture.

In contrast to his inept response to the riots in Tunisia and Egypt, Sarkozy not only condemned the regime of Gaddafi, but was the first to recognize the interim National Transitional Council, in Benghazi, and to take the initiative of getting the resolution approved to authorise air attacks. He estimated that it would be an excellent opportunity to show off how someone superior in national politicking could be bold and internationally put France in the "pantheon of great nations." aiming to increase his popularity.

Furthermore, the intervention in Libya would be a way to reassert his position in Europe, and especially as a counterweight to the political and economic power of Germany in the European Union. It's a message that says that if Europe is to be taken seriously as a world power, the French military is a mainstay of its props.

In messages on radio and television, the French president tried desperately to improve his image, hailing the "great hope" brought by Arab riots. Dominique Paille, President of the French Department of Immigration and Integration, observed "a few weeks ago we were watching the train of history go by, it was time for us to become one of the locomotives ourselves."

In turn, Claude Guéant, Minister of the Interior and Immigration, a man in the confidence of the president, wanting to compete in the ideological land of the extreme right-wing (the new leader of the National Front, Marine Le Pen, comes up first in searches) stated that "because of uncontrolled immigration, the French sometimes have the feeling that they are no longer at home."

Do not forget that Sarkozy spent five years as Minister of the Interior building the image of a radical fighter against crime and immigration (in areas related to people of Muslim origin).

Apparently Sarkozy wants to repeat the political strategy of the 2007 campaign when he sought to follow the advice of Karl Rove (Bush strategist). Instead of trying to build a majority, it is more effective to promote controversial issues such as immigration, identity, crime and Islam, which may provoke the fragmentation of the opposition. The result, in the long term, is a greater level of social dissent and violence.

The difference, and it is much more serious, is that now the focus of domestic law and order is closely connected to French and European foreign policy. In a sense, France wants to reprise its role of the nineteenth century, when European colonial powers were seeking to project their power and protect their interests outside of Europe.