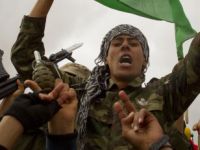 As you will be aware, the United Nations Organization had planned, this month, to pay homage to Muammar Al-Qathafi for his human rights record, after a carefully researched report was drawn up, praising him for his tremendous humanitarian work not only in his own country but across the African continent, where he is much respected.

Now a question. If a group of carefully trained heavily armed citizens seized power, burnt buildings, massacred civilians and destroyed government property in, say, Texas, Northern Ireland or Corsica, what would the authorities of your countries do? Stand back with their hands over their hearts or meet the challenge with armed security forces? You do know who started the massacres in Benghazi?

Another question. Where did all those former Libyan flags come from? Were they lying around somewhere in Libya for the last half-century or were they manufactured overseas, as was the Libyan "Revolution"?

Actually, a series of questions. Did you know that Muammar Al-Qathafi inherited the poorest country on Earth and turned it into the best in Africa in human development indices? Are you aware of the tremendous amount of good Muammar Al-Qathafi has done and continues to do across the African continent?

Were you aware that Libyans enjoy free housing? Have any of you implemented nationwide free housing policies in your countries?

UN Resolution 1970 (2011) forbids the supply of weaponry to the "poor unarmed civilians" (aka armed terrorists) running amuck in Libya. Why are the "rebels" then sporting sophisticated and heavy weaponry? Why are weapons being smuggled to them through the Egyptian frontier, so conveniently secured and from the west across the Tunisian frontier, the first stage of Operation Grab Libya's oil?

Who is supplying this weaponry and why is there not an independent investigation, now? UN Resolution 1973 (2011) forbids the deployment of troops in Libya. This includes special forces. What are they doing there, then? Why are they training the terrorists?

As you know, a similar uprising in Iraq was put down by your friend, the Prime Minister's troops, who opened fire killing 29 in Baghdad. Why haven't your free and independent media said a word about this? What is your policy on Yemen where the military forces of your friend the President are killing poor unarmed innocent civilians? Where is the No Fly Zone over Yemen, or Bahrain?

Why do you keep insisting you are not taking sides, when your air forces are bombing military columns from one side but facilitating the advance of the other? If that is not taking sides, I don't know what is. Why are you lying to your people?

What justifies the strafing of civilian facilities, which goes totally against the remit under Resolution 1973? Why are you attempting to murder Muammar Al-Qathafi and his children? How would you feel if someone murdered a member of your family? 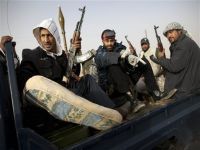 You do know the origin of these wonderful unarmed civilians running around with heavy weaponry chanting Allahu Akhbar, do you not? You do also know that Muammar Al-Qathafi was one of the first figures to outlaw Al Qaeda? And you will be aware, of course, that Al Qaeda is indeed operational in Libya and has seized some sophisticated weapons systems which no doubt will be used tomorrow in a terrorist attack?

And you will be aware of the role played by AQIM in the Libyan uprising of course? Nicolas can ask Chad's President Idris Deby - he speaks French. Do you speak French President Obama? Prime Minister Cameron? You do know that AQIM has links to Al Qaeda and you also realise that in helping the "innocent civilians" you are also helping AQIM and therefore recognise that you are in fact aiding and abetting Al Qaeda?

The Americans will need no reminding what happens when you start arming Islamist fanatics, as per Afghanistan - the payback and thank you note was 9/11.

You do know that Islamist fundamentalism has been brewing in Benghazi for decades, that many members of the "Revolution" have been trained in Afghanistan, and that Al-Qathafi had caused fury there in Benghazi by daring to declare himself against stoning of women for "adultery" and the death penalty for homosexuals? Of course you also know that he stirred up rage in Benghazi by calling the Islamic veil a "rag" and a "tent"? You will be aware that the sentiment against him in Eastern Libya is because he has been throwing Islamist fundamentalists into jail, and for daring to say Christians and Jews should be allowed to visit Mecca?

Why have the Libyan information websites been taken down? Why are your governments practising cyber terrorism alongside the terrorist attacks with military equipment?

How comfortable do you feel, and I address myself to Mr. Cameron here in particular, about closing down hospitals in your country while the cost of the operation is, just in flying costs, somewhere like 50.000 pounds per aircraft per hour? To help Al Qaeda set up a base at the gates of Europe? 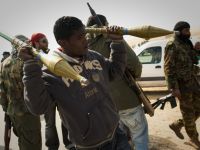 Do any of you know what in fact you are doing? Or are you driven by the desire for a war to bolster flagging support at home? You did realise that Colonel Muammar Al-Qathafi has a higher popularity rating inside Tripoli than you have in your capital cities?

Once again, you have jumped the gun inventing some Quixotic cause to justify your own ineptitude and to satisfy the energy and weapons lobbies which in fact run your policies. You three are the most disgusting examples of useless, spineless incompetent wannabe protagonists who have, in Libya, shown an extremely high degree of irresponsibility.

That having been said, if you want an exit strategy, here it is (because I have no doubt you are collectively unable to formulate one for yourselves). Accept the Libyan government's ceasefire, stop the campaign NOW and allow the African Union to step in and broker a deal. Stop arming terrorists, stop wasting your taxpayers' money (the bill for the Americans is already in the hundreds of millions; for the British and French many tens of millions already. How many maternity wings, how much school accommodation or medication against cancer would that fund? "Sorry Mr. Jones. We cannot continue with your treatment because the NHS does not have that type of funding. In the six hours you have been waiting to be seen, your Government has spent 300.000 on a single aircraft's sortie over Libya"). Helping Al Qaeda.

Sterling job, chaps! Tell you what...you are unfit to be in your positions. If anyone "has to go" it is you three. And this time, if I receive one single death threat in my mails (which usually follow this sort of article) I shall be investigating the source. This time I shall be implacable and shall not simply delete them.