By Humberto Alencar
with agencies 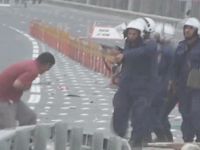 The recent deployment of over a thousand soldiers and 500 policemen from Saudi Arabia and the United Arab Emirates to the monarchy of Bahrain indicates that the United States, true masters of the situation in the region, are increasingly concerned with the action of the Bahraini opposition groups, who want to democratise the country.

The rebellion which initially took to the streets for the establishment of a parliamentary monarchy was suppressed with bullets. Evidence that the U.S. is trying to gain control over the opposition was the pressure that President Barack Obama put on King Hamad al Khalifa to get the police and army to retreat, because they had already settled with the country's opposition for an opening of "dialogue."

Two Bahraini ministers of the royal government resigned from their posts on Wednesday after a major crackdown by riot police and the troops in Bahrain sent in from Saudi Arabia against protesters who tried to protest at Pearl Square in downtown Manama, the capital of the kingdom.

Saudi military forces were put into action and came to invade a city hospital where injured protesters were being treated. Witnesses said the Saudis would have taken everyone in the building - including nurses and doctors - as prisoners, threatening to use live ammunition against them.

A doctor at Salmaniya Hospital reported to BBC that "they are around the hospital with their guns and are firing at anyone in front of the hospital complex."

Other organizations said that doctors who tried to help the injured protesters were beaten by police. The Bahraini police blocked access to the hospital.

Among the Saudis also were military from Qatar and Oman. There were reports that Shiite judges have resigned their positions at the country's court because "of the bloody events and the use of excessive force in addition to weapons," according to reports from Iranian press.

Following the crackdown, which left five dead, U.S. President Barack Obama called King Abdullah of Saudi Arabia and King Hamad of Bahrain. According to a spokesman for the White House, Jay Carney, Obama expressed his "deep concern" to the monarchs about the riots of the opposition in Bahrain and the violence used in their repression.

Although a small country with a relatively small population - 1.2 million inhabitants - Bahrain is of paramount importance for imperialism and Zionism. Its territory is 750 square kilometers on the Gulf, and it hosts the U.S. Navy Fifth Fleet, which controls the water through which 20% of the world's oil passes and it is a strategic base of logistics for provocations against Iran. From there they launched the attacks on Iraq in the 1st Gulf War in 1990, and for the 2nd, eight years ago.

Bahrain is one of the most diversified economies in the Gulf. With highly developed sectors of transportation and communication, Bahrain has become home to numerous companies doing business in the Gulf. As part of its diversification plans, Bahrain implemented an FTA with the United States in August 2006, which was the first FTA signed by a Gulf state with the U.S. The country's economy depends largely on oil. Its production and refining results in more than 60% of Bahraini export earnings, 70% of the profits of the government and 11% of the national GDP.

In Bahrain, imperialism seeks to deconstruct and undermine the revolutionary movements underway in the Middle East. There is no doubt that behind the actions of Saudi Arabia and the United Arab Emirates is the hand of the Pentagon. As evidence, just look on the internet for any statement of any authority of the United States proposing the overthrow of the monarchy of Bahrain, Saudi Arabia and Morocco - U.S. satellite countries in North Africa and the Middle East - or asking for an urgent meeting of the Security Council UN to punish the perpetrators. You most certainly will come up empty handed.

In an editorial published on February 23, the American newspaper The Wall Street Journal said that "the U.S. and Europe should help to overthrow the Libyan regime of Gaddafi." Before and after that editorial there is no mention of Washington's intervention to help the protesters from Kuwait, Saudi Arabia and Bahrain to overthrow their dictators.

Much less about Israel, the most important satellite to the U.S. in the Middle East. There was no U.S. intervention to help the Palestinian people in Gaza when thousands of Palestinians died as a result of the blockade promoted and executed by Israel. Nor will there be, since Obama has vetoed a resolution by the UN Security Council condemning Israeli housing construction in the occupied territories of Palestine.

Outpost in the Persian Gulf

In population terms, Bahrain is very impressive, home to just over 1.2 million inhabitants, a figure that may have gone down after the exoduses provoked by the struggle of the Shiite majority against the minority Sunni of the Kingdom al Khalifa. About 16% of each thousand of the country's inhabitants are migrant foreigners.

Besides oil, other economic activities are aluminum production - the second largest export item of the country - the financial sector and civil construction. Bahrain rivals with Malaysia as the center of the international Islamic banking industry. Unemployment, especially among youth, is one of the gravest problems of the economy, which made the monarchy withdraw benefits for immigrant workers and increase costs for companies that were employing foreigners.

The country has 611,000 workers, according to estimates published by the Bahraini monarchy in 2010. Public debt in 2009 was over 59%, while inflation was around 3.3%. The largest customer Bahrain exports to is India (more than 4%), followed by Saudi Arabia (2.78%), a country which accounts for 22.95% of imports that the economy generates per year. The second largest exporter to Bahrain is France with 9.76%, while the U.S. accounts for 7.95% of imports.

The leader of the Shiite opposition in Bahrain, the monk, Ali Salmane, is the representative of the National Association of Islamic Understanding. The association has 18 deputies in the Assembly, in a total of 40 parliamentarians, and Salmane repudiates all forms of repression applied by the reign against the citizens. "Security solutions cannot solve the crisis," he said, after a bloody crackdown on protesters was ongoing for ten days ..

About 88% of the inhabitants are Muslim, of which 70% are of the Shiite confession. Because the command of the country is in the hands of the Sunni minority, they are demanding more job offers and opportunities, saying they face discrimination. They also want better housing for the population, the release of political prisoners, as well as the creation of a representative Parliament. Al Khalifa has been in power for 40 years.

The monarch of Saudi Arabia, Abdullah bin Abdul Aziz, was already claiming it was necessary to placate the wrath of the people with economic measures, both in Saudi Arabia and Bahrain, where he even sent money. As the protests persisted, he eventually ended up sending troops to the neighboring country, together with the United Arab Emirates, which, curiously, declared the sending troops through his chancellor, told it at a news conference beside the U.S. Secretary of State of the United States, Hillary Clinton.

Opponents denounced the sending of troops as "an open occupation of the kingdom of Bahrain and a conspiracy against the unarmed people," denouncing also that more Saudi troops were already in the country.

Before they were concentrated in Pearl Square, where they had installed barricades and tents in the manner of Egypt's Tahrir Square, the Bahraini movement was demonstrating on the streets of Manama. Besides the leading Shiite opposition movement, there are also among them supporters of a republic and of a constitutional monarchy.

The threat of foreign military intervention in Libya is obviously associated with these events in Bahrain. The facts here are closely interwoven and linked to the strategy of imperialist domination, which also passes through the containment of democracy in Egypt, Tunisia and other Arab satellites still subservient to imperialism.

The central objective of the United States is to contain and undermine the revolutionary wave in progress in the Middle East and North Africa at this time.

Photo:  protester shot point blank...now where is this protester's RPG, rifle or tank like those "civilians" in Libya?