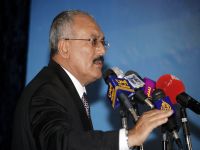 The Yemeni President Ali Abdullah Salé (pictured) said on Tuesday (22nd) that the opposition movement leads the country into an "insecure situation." Salé has threatened the opposition with the ramifications of a civil war because of what he called a "coup attempt" by the opposition.

"Those who want to come to power through coups should know that this is out of question. The country will not be safe, there will be a civil war, a bloody war," he said, quoted by the BBC.

On Monday, several military officers declared support for the protests against the dictatorship. General Ali Mohsen al-Ahmar, one of the military's most important in the country, a former ally of the president, said publicly that he went over to the demonstrators. Two other top officials have also resigned from the Army on Monday.

Proof of that is the death of two soldiers in clashes between the army and Republican Guard, an elite weapon of the president, stopped in the city of Mukalla, in the country's southeast.

The government of Salé has been weakened every day by a series of resignations, since nearly 50 protesters were shot dead at a demonstration last Friday.

Maintaining the same stance of Egyptian President, Hosni Mubarak, Salé defies protesters. A source close to the president told BBC that he does not intend to leave power, where he has been entrenched for 32 years. and he only vaguely admits to recall the year-end elections. Salé dissolved his entire cabinet on Sunday.

The United States, which lost no time in criticizing the Libyan regime of Muammar Gaddafi, now does not react with the same virulence. The only manifestation of the American regime was its embassy in Sanaa, which urged Americans living in the country not to leave home, since Salé announced a state of emergency after the massacre on the outskirts of the University in the capital that caused 45 deaths and 270 injuries.

There are not sanctions being voted on, there aren't any no fly zones, no bombing, their hypocrisy knows no limits. Claiming to fight terrorism out of one side of their face and arming Al Quaeda out of the other.