I was wrong about President Obama 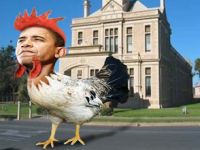 Let us call a spade, a spade. Let us call a group of armed marauding thugs, committing acts of terrorism and arson, terrorists and arsonists and let us call those who manipulate the words of others to justify their actions, barefaced liars. President Obama is one of these and how wrong I was to believe that he represented a new America.

How wrong I was. I praised the American people for not playing the race card in the last election because I am not a racist. My oldest son's four grandparents were born in four countries in three continents and how wonderful that is. But let us call a spade, let's tell the truth and not invent lies to hide behind. The fact is, the west got the entire Libya story wrong.

Fact: There is a tremendous amount of support for Colonel Muammar Al-Qathafi in Libya. Fact: Libyans enjoy the highest human development indices in Africa. Fact: in 1951, Libya was the poorest country in the world. Fact: the rebellion in Benghazi began with armed groups of thugs perpetrating massacres and acts of terrorism, against unarmed civilians.

Fact: I praised President Barack Obama for his new and fresh and very welcome stance on international relations. How wrong I was. Let us call a spade, a spade. Call him a lawyer? He is a liar. A cheap, unadulterated, disgusting, barefaced liar. He purposefully misinterpreted the words of Muammar Al-Qathafi, claiming that he had threatened his people with violence.

He said that he would give a window for terrorist elements to lay down their arms and then said he would be implacable in punishing those who did not. How Barack Obama can claim the opposite defies logic. The only conclusion I can make is that Barack Obama is either a snivelling yellow-bellied coward who does what he is told by the Clinton (War Zone) lobby or else he is a sham.

A fake. A front man, a failed salesman without an iota of character, an iota of substance, a spineless wimp who has destroyed any legacy he might have built in attacking Libya, standing up for Islamic terrorists in Benghazi. It is patently clear whose side he is on.

If Barack Obama is short on the truth, let us inform the people of the United States of America what is going on. Let us call a spade, a spade. The uprising in Libya was aided and abetted by the CIA, it concentrated on the hotbed of separatism, Benghazi, which is today crawling with Islamist terrorists - the "bearded ones" as the Libyans call them.

Then it was drugs, now it is oil.

And what a sickening disappointment Barack Obama has become. Rather than being the champion of a new approach, as he promised to be, he is a pathetic and useless shadow, a spent force before he got off the ground. Barack Obama is an insult to those who believed in him.

The people of the United States of America may as well vote for Sarah Palin next time around. At least she does not try to cloak her stupidity in swaddling cloths soaked in scent.

Barack Obama may not have the guts to explain to his people what he has done in Libya so let us explain it to them ourselves. In 1951 Libya was the poorest nation on Earth. Today, it has the best human development indices in Africa. Libyans enjoy free housing, education and healthcare.

When Barack Obama implements such policies in the United States of America then maybe people will applaud him. Until then let us see how much he has spent in supporting the bearded allahu akhbar fanatics in Benghazi: over 70 million USD in one day.