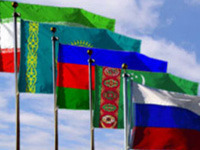 The USA intends to contain Russia and Iran in the Caspian area. At the same time, the US is planning to help Azerbaijan, Turkmenistan and Kazakhstan develop their navies. A report published on EurasiaNet said that the US administration emphasizes the increasing importance of Caspian Sea security and the possibility of the sea's militarization."

The above-mentioned countries are planning to build their navies "more or less from scratch" in spite of the fact that Azerbaijan, Turkmenistan and Kazakhstan have impressive flotillas in the Caspian Sea, especially Azerbaijan.

Moreover, a comparison of naval forces shows that the strongest country in the region (except for Russia, of course) is Azerbaijan. For instance, the navy of Azerbaijan is stronger than that of Iran.

EurasiaNet says that "it's hard to tell how serious the new plans are, but it does seem to be a concerted effort to build naval capacity in the Caspian."

US journalists give certain examples of how Washington is going to develop its military and technical cooperation in the region. First off, the Americans intend to increase the power of Azerbaijan's navy, which is strong enough already. In addition, "the United States will continue to work with Azerbaijan's navy to increase Caspian maritime security, develop professional military education, enhance peacekeeping capabilities in support of coalition operations, and promote progress towards NATO interoperability..."

Thus, the Americans hope to get Azerbaijan involved in the North Atlantic Alliance to use the country in its interests.

As for other of the above-mentioned Caspian countries, the USA does not pay that much attention to them. The US is not planning anything that would be related to Turkmenistan's NATO membership or joint "peacemaking" operations.

As for Kazakhstan, the State Department is planning to modernize the combat navy aviation of this country, particularly the fleet of US-made Huey II helicopters.

Why do the Americans need to militarize the Caspian Sea? It seems like the US targets oil and gas resources of the region in the first place. American reporters acknowledge: "an attack on oil or natural gas infrastructure in the Caspian would be an economic blow to the world economy, though a small one." It looks like it goes about the Nabucco project, which stipulates the shipment of Caspian resources to the Western market to Russia's detriment.

American reporters acknowledge that it is not the first time when the USA is trying to assist the development of navies of the above-mentioned countries. Washington previously sold patrol boats to them within the scope of the Caspian Guard Initiative. The current state of affairs is more serious, as it seems.

Let's assume that the Americans will never refuse an opportunity to make an additional profit from arms sales. However, for whom do the three former Soviet republics (Azerbaijan, Kazakhstan and Turkmenistan) want to flex the military muscles?

According to EurasiaNet, these three countries become rich with oil money. They want to protect their investments and flex their muscles too. "It's an obvious geopolitical check on the two major Caspian naval powers, Iran and Russia, which both have been building up their navies recently," the publication says.

Konstantin Sivkov, a naval expert, told Pravda.Ru that the Caspian Sea was extremely important for the USA.

"It does not go about the control over local energy resources only. The States need the region to realize aggressive plans against Russia, China and Iran afterwards. The US has built close ties with the political establishment of Azerbaijan. The USA is conducting defense cooperation with this and other countries. Therefore, it has an opportunity to exert influence on their policies. If America supplies everything for the navies of those countries, it will be able to control their military power. If some of them act contrary to Uncle Sam's will, they will be in trouble. In this case, the States will easily disable the supplied equipment, and the military hardware of the Caspian countries will turn into rubbish," the expert said.

It goes without saying that Azerbaijan's sitting President Aliyev will not become a puppet in the US game against Russia, as it happened with Georgia's Saakashvili. However, Washington can use Aliyev's regime similarly to the Georgian scenario of 2008, albeit against Iran. The relations between Baku and Teheran have been quite intense lately, to put it mildly. Iran has been extremely concerned about the subversive activities on the part of Azeri special services in Iranian Azerbaijan. Iran is also concerned about Azerbaijan's plans on the natural resources of the Caspian Sea.