Cameron, Clinton and Sarkozy: A threat to international peace 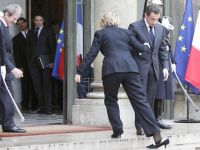 What happens when you get protagonists on the international political scene with serious problems at home? In a word, trouble. Like the western media, these politicians got the Libya story wrong from day number 1, raising serious questions as to their capacity to perform in their positions.

Why, for instance, have the western media been caught lying about air strikes that never existed, about bombing of civilians when the buildings they were supposed to have bombed are still in pristine condition; why have there been stories about "Gaddafy" turning the full weight of his heavy weaponry against "unarmed civilians" when what we can see clearly is marauding gangs of terrorists and thugs committing acts of savagery, arson and wanton destruction?

Why have David Cameron, Hillary Clinton and Nicolas Sarkozy failed to mention - even once - the massacre of supporters of Muammar Al-Qathafi in Benghazi? Not one or two people, not soldiers, but no less than 212 (two hundred and twelve) unarmed civilians - these, yes, were indeed unarmed - in Benghazi (where else)? Murdered in cold blood.

Why have they failed to mention - even once - the origin of all the mercenaries fighting in Libya - not only to support the government forces but also fighting alongside the "rebels" from Benghazi - a separatist region. Britain and France both experienced long and bloody fights against separatists, in Northern Ireland, in Brittany, in Corsica.

Why have Cameron, Clinton and Sarkozy failed to mention the fact that the Libyan Government welcomes an international peace plan proposed by President Chavez of Venezuela and the setting up of an International Peace Commission, why have they failed to mention the fact that Muammar Al-Qathafi suggested that a team from the UN Human Rights Commission should come to Libya to make an investigation into what happened?

Why have they failed to mention the fact that Libya's oil wealth has been ploughed back into the economy, giving the Libyans the best standard of living in Africa, with the best human development indicators in the continent? Why have they failed to mention that before Al-Qathafi took over, Libya was officially the poorest country in the world, with per capita income at less than 50 USD a year?

Let us be honest. On the domestic political front, Cameron, Clinton and Sarkozy want and need a Falklands, a Kosovo, an Afghanistan or an Iraq, they need to find a "tinpot dictator" who "oppresses his people" who is easy to isolate, to take the eyes off their own oppressive policies at home as they destroy the social fabric of their countries and render the futures of millions of young people hopeless.

Let us be honest, on the commercial front, their oil companies wish to renegotiate their contracts under their own terms - and not just in Libya, but in the whole of Africa. It is as one of the fathers of the African Union and one of the architects of African Unity where Al-Qathafy has angered the western vested commercial interests, so used to imperialistic and colonialist policies which saw Africa's resources going one way - their way.

Now that Al-Qathafi is trying to change that trend, he is called a monster and "has to be removed because he is a threat". THEY are the threat. They always have been.