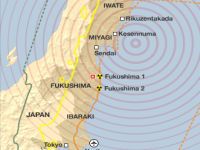 After the largest earthquake in Japan's history, if that weren't enough along with the tsunami, Japan's Fukushima nuclear facility has experienced a catastrophic explosion. The walls blew out on the visible and opposite side of the containment building. Those walls are thick, reinforced concrete walls.

Efforts at containment obviously failed to stop the reactor core from blowing up. Smoke poured out after the explosion and it is feared the reactor is melting down following the failure of its cooling system. Containers of uranium fuel inside the reactor may have begun melting.

Japan has a history of covering up accidents such as this. Officially, Japan's Nuclear and Industrial Safety Agency insisted that there were only "slightly radioactive" emissions released which pose no risk to people or the environment.

Radiation levels inside the reactor housing were said to be 1,000 times normal, the agency said, but supposedly only eight times normal background at the plant's main gate.

However, people were fleeing the surrounding area as an evacuation was ordered for an area within a ten kilometer radius of the plant. Japanese television was urging people to stay inside, but to cover their faces with wet towels and not to expose any skin to the potentially contaminated air should they be outdoors.

One wonders about the radiation, how much and where is it headed? Westerly winds could carry radiation to the Korean penninsula, China and Eastern Russia.

There have been 100 aftershocks, a dozen of them were 6.0 or higher. At least 1,375 people are reported killed at this time, with many more missing as rescuers try to reach survivors. In just Minamisanriku, Japan, more than 9,500 people are unaccounted for.

Japan is densely populated, so casualties could possibly be enormous.