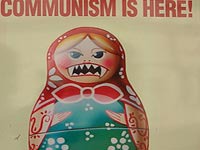 Former socialist countries are struggling against the phantom of communism again. This time, the wave of struggle reached the most peaceful of former socialist states - the Czech Republic. It seemed that the Czechs were no longer preoccupied with the struggle against the Soviet legacy. However, reality proves the opposite.

The Baltic states and Poland have never finished their struggle against communism. One may recollect the trial over former communist leader of Poland Wojciech Jaruzelski and the laws equating communist and Nazi symbols, which were passed in the Baltic region. The government of Hungary made a similar move last year. Now it is the turn for the Czech Republic.

A group of Czech anti-communist activists have recently sent an address to the country's Finance Minister Miroslav Kalousek urging the official to name Airport Ruzyne in Prague after US President Ronald Reagan. Why Reagan? Many in the West ascribe the victory over communism to Mr. Regan. The Czech segment of Facebook already has a special group titled "Ronald Reagan Airport Prague."

The above-mentioned activists wrote in their address that Reagan's principles, his struggle for human rights, his optimisms and sense of humor were a source of hope and strength for many of those who did not want to live under the conditions of communist totalitarianism. The activists also reproached the Czech administration for not naming a street in the city after the American president. They also wrote that a monument to Reagan should be unveiled in the Czech Republic.

No official comments have been returned to the offers yet.

From the point of view of common sense, the initiative sounds ridiculous. Reagan is a politician who has nothing to do with the Czech Republic. The ten-million-strong republic in the center of Europe has its own prominent people whom it can be proud of. They could name the airport after church reformer Jan Hus, educator John Amos Comenius, writer Jaroslav Hasek, or composer Antonin Dvorak. In the long run, they could name the airport after the founder of Czechoslovakia, Tomas Masaryk. Still, they chose Mr. Reagan instead.

The above-mentioned Czechs did not take any part in the struggle against the USSR. The goal of the sitting administration of the country, as it seems, is to establish the new anti-communist front. The front, as it appears, will aim its efforts against Russia, the successor of the Soviet Union.

What is more, Czech Prime Minister Petr Necas, Foreign Minister Karel Schwarzenberg and Interior Minister Radek John, on behalf of three parties of the ruling coalition, believe that communism, just like fascism, should be equated to totalitarian phenomena.

The Czech Republic has been very active internationally too, in terms of the struggle against communism. Foreign Minister Schwarzenberg and his counterparts from Bulgaria, Romania, Latvia, Lithuania and Hungary, have recently signed a letter to the European Committee to ban the rejection of communist crimes in Europe. The ministers believe that communism must be equated to fascism.

"One should treat totalitarian crimes equally. To be frank, Stalin managed to kill even more people. They both were mass murderers, and those, who served them, were their associates," Schwarzenberg stated.

It should be noted here that the Czech minister is a descendant of an illustrious name that lost much of their property during the communist rule.

Similar statements can be heard from probably the most famous Czech politician, former President of the country Vaclav Havel. He would never miss anti-Russian or anti-communist events out of his attention. Havel used to suffer from the communist authorities of Czechoslovakia. His family was rich, was not persecuted by Nazis, but then it was deprived of property by communists.

The Czech Republic has its own anti-communist "inquisition" - the Institute for the Study of Totalitarian Regimes. A funny story took place to this organization last summer. In an attempt to unmask all lackeys of communist times, the institute attracted public attention to many officers of Czech secret services, including those working abroad.

There is also the Museum of Communism in Prague. Any person visiting the museum will be told that the socialist Czechoslovakia was living very bad, and that it all happened because of the USSR and the Russians.

Nevertheless, the Czech Republic turned out to be much more reasonable politically than some of its neighbors. The country has never struggled against communist symbols. In addition, the Communist Party is still represented in the parliament. Sitting President Vaclav Klaus has never compared the communist regime to Nazism in his critical comments. More importantly, Klaus firmly believes that his country must maintain friendly ties with Russia. However, the Czech Republic is a parliamentary republic, and it is the government which predetermines politics first and foremost.

As soon as right forces came to power in the country in the summer of 2010, the Czech government began to look like an anti-communist circus. Therefore, Czech initiatives to name the airport after Reagan and condemn communism across the continent do not really raise any eyebrows. It is not ruled out that those are just tricks to distract public attention from the current social and economic situation in the country. The Czech Republic has not suffered from the economic crisis much. However, most of the people are displeased with the actions of the government.

Unlike fascism, the communist ideology has not been recognized as criminal. Communists still sit in the parliaments of Europe's largest countries, such as France, Germany, Italy and Spain. In the Czech Republic, the Communist Party regularly receives the support of more than ten percent of voters. As for the crimes of Stalinism and the deployment of Soviet troops in Czechoslovakia in 1968 - both Russia and the European Union repeatedly condemned them.

Thus, the current chase for "communist witches" in the Czech Republic is nothing but a political speculation.