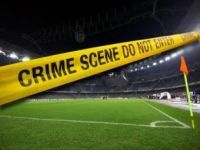 Considered the most corrupt class, demoralised, cynical and mendacious throughout the social stratification in Brazil, Brazil's politicians can make the World Cup, scheduled to be held in 2014 in the country, the biggest sporting embarrassment of all time, worldwide.

Blatter hinted that political battles surrounding the event are hindering the organization's 2014 World Cup in Brazil. "Let's wait and see, but the decision on the stadium has to be a sport decision and not a political decision," stressed the president of FIFA.

Blatter said that sports officials, not politicians, are going to decide and doubted that the arenas of Sao Paulo or Rio de Janeiro are ready for the Confederation Cup in 2013, considered a rehearsal for the World Cup.

"We just had the first meeting of the organizing committee and it has not been decided where the opening match will be played," Blatter told reporters in Zurich.

The FIFA president also said that "We do not have the stadium ready in either Sao Paulo or in Rio de Janeiro, and they may not be ready for the Confederation Cup in 2013. So let's wait and see, but the stadium decision is a sporting decision and not a political decision."

President Rousseff met with the Governor of Sao Paulo and the capital's mayor and expressed hope that the opening of the 2014 World Cup will be played at the Corinthian stadium to be built, according to Sports Minister, Orlando Silva.

Because of being mayor of the largest city in Latin America, the cosmopolitan Sao Paulo, Gilberto Kassab puffed out his chest and, as if he were the owner of the 2014 World Cup, said that "undoubtedly we will have in Sao Paulo the opening of the World Cup."

After Blatter's declaration, the mayor of Sao Paulo said that he maintains the goal of hosting the opening of the tournament. "Actually the decision lies with FIFA, but Sao Paulo is trying as best as possible to receive the opening World Cup," informed the spokesperson for Mayor Kassab.

The arena for the Sao Paulo World Cup is a major concern for organizers. Morumbi Stadium, Sao Paulo's first choice, was dismissed by FIFA after the Sao Paulo Football Club, which owns the stadium, did not provide financial guarantees for the refurbishing needed for the tournament.

In late August, after a meeting between Sao Paulo authorities and the president of the Brazilian Football Confederation (CBF) and the organizing committee, Ricardo Teixeira, it was decided that the future Corinthian stadium would host the games in the country's largest city.

Teixeira even announced in November that the arena of São Paulo was chosen to receive the initial game. However, the stadium has not even begun to be built. According to the mayor of Sao Paulo, there is a dispute with the prosecution service on the land where the stadium will be built in the district of Itaquera, but the construction must start in April.

The initial project of the Corinthian stadium had a capacity of 48,000 people, but FIFA requires 65,000 seats for the opening match. The amount required for the expansion of the arena has not been disclosed, and the leaders of the Corinthian will also did not detail how this will be funded.

Brazil won the right to host the 2014 World Cup in 2007, according to a rotation of continents provided by FIFA, which extened the right also to South Africa to receive the World Cup last year.

"We just had our first meeting with the organizing committee and have not yet decided where the opening match will be played. We have no stadium ready, either in Rio de Janeiro and Sao Paulo and even, perhaps, neither is going to be ready for 2013 Confederation Cup," Blatter said.

FIFA has confirmed that the future Corinthian Arena will be the stadium for Sao Paulo for the World Cup, discarding the use of the Morumbi stadium.

In Brazil it is common knowledge that with every event of which the finger of politicians or someone nominated by them is indicated, in the end scandals appear of the most varied kinds and hues, a fact that requires urgent measures to prevent the World Cup 2014 from ceasing to be a sporting spectacle for all races and peoples and becoming more of a series of obstinate scandals sponsored and interpreted by the national political class.