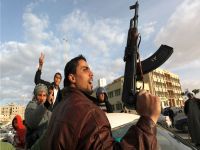 Thousands of people loyal to the Libyan leader, Muammar al-Gaddafi, concentrated in the capital today to repeat statements of support last night at Green Square, in response to the call made in the televised speech by the president.

Youth with green bands, as Gaddafi indicated in his speech, waved flags and condemned what they called traitors for serving the Western powers, while they repudiated the coverage of the crisis by the foreign media.

The Interior Ministry acknowledged that around 300 people died in Libya during the antigovernment protests during the nine days that the country has been plunged into chaos, while opponents ensured control in several eastern cities.

The tally of victims was released in a report broadcast by Libyan state owned television, which also announced an offensive of the Executive to attempt to restore order in the nation's west and east, in towns such as Benghazi and Tobruk.

Images on Arab television channels said that the town of Misratah, relatively close to the capital, Tripoli, is also controlled by the rioters, who have joined men in olive uniforms, apparently army deserters.

Many businesses remain closed, labor activities are semi-paralised and cemeteries repeat scenes of mourning for the burial of victims in makeshift graves. Benghazi and Tobruk are "managed" by popular committees set up by rioters.

In his speech yesterday evening, Gaddafi admitted that some regions were taken by opponents, which he described as "young people who get drunk and use drugs," but promised to take stern measures to restore order and punish the rebels.