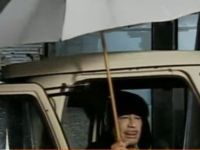 The wave of intrigue is spreading across the Arab world. It is hard to predict what direction events will turn finally.

Cairo's Tahrir Square is now portrayed as a symbol of victory. However, in the case of Libya, the stage is now totally media and internet created with sensationalism spawned by weapons of mass deception, trying to impose from without a solution agreeable to the imperialists.

Their overt efforts started with rumours of Khaddafi fleeing to Venezuela, which were shown for the nonsense they are when Khaddafi showed up in public in Tripoli, having hoped to join with the people on the street...but it was raining, so he just made a short speech of reassurance under an umbrella.

It was also rumoured that pilots had defected with their Mirage jets, having refused orders to bomb their own people. However, those jet pictures were identified by Russian military as Russian made, not containing any bombs, but only extra fuel for a long distance run. I suppose the pilots were to drop rolls of toilet paper on the people in the streets on their way to Washington.

Fact of the matter is the western corporate media has also been caught numerous times passing off film footage and pictures from Bahrain and Yemen, claiming they came from Libya. It is wise not to trust any western media outlet and let things play out as they were meant to.

Already, many of the Libyan demonstrations were shown to be in support of the Libyan government. And why not? Libya's statistics say much.

Today, oil revenues and a small population give Libya one of the highest GDPs per capita in Africa and have allowed the Libyan state to provide an extensive level of social programmes, particularly in the fields of housing and education. Health and education are things that Libyans can take for granted. The standard of living in Libya is higher than that of all the neighbouring countries.

Women have rights, illiteracy has greatly decreased under the leadership of Khadaffi. Humanitarian work and unity efforts for the African peoples have come from the leadership of Libya. A great project is underway for irrigation of desert land.

Compared to neighbouring countries, Libyans enjoy a low level of poverty. Economic reforms have been carried out in the last few years to integrate the country into the global economy.

These rioters / terrorists are now reportedly attempting to take control of Libyan oil fields. Does that sound like something that would benefit the people of Libya or benefit Washington DC?

They have been attempting to take control of military facilities, heavily armed.

It is best to resist the temptation of some who would put words in the mouths of the Libyan people. You have to ask yourself: Is there any organized opposition that hasn't been infiltrated or directed from outside?

It is more than obvious that the Libyan opposition has been organized by Washington DC, as reported previously in this space. One has to wonder when Libya's outlet to the world has been deliberately cut off (server is too busy), why aren't thinking people asking questions instead of mindlessly accepting what is passing for "reporting" on events in Libya. 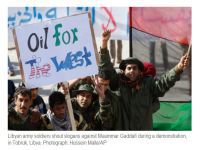 We have certainly already caught them in lies, in a court of law that would disqualify someone's entire testimony. See the photograph being passed off as legitimate protesters when it is obvious they are in support of their leader.

Now the Egyptian events take on new meaning. The groundwork was being laid for the planned assault on Libya. They are invading Libya from Egypt. Bought and paid for mercenaries from God knows where posing as "Libyan protesters" with posters "made in the USA" and weapons "made in the USA." They have crossed the border between Egypt and Libya in a covert act of war to cry murder, dictator and whatever else about "crimes" being committed.

However, how is one to handle an invader? Has something changed we don't know about in international law?

I am reminded now of Yugoslavia. What you have is an anti-terrorist operation being fought by the government of Libya and its people. A country is trying to defend itself, its territorial integrity and sovereignty. And the west doing all in its power to counter it and destroy it.

It is a socialist state that is under attack because it will not totally and completely surrender its resources to the resource gluttons of the west.

They are so blatantly obvious about their activities now, not even trying to hide it. A news program showed plotters and terrorists planning riots in Libya from locations not inside the country using a dating site and code words. And the sheeple think nothing of it.

What is this that the international community is willing tolerate and cooperate with? Open terrorism sponsored by those who claim to be fighting terrorism, nothing less! No matter what one thinks about Khaddafi, this is morally wrong and against international law.

The United States of America has subverted countless governments, most democratically elected, put in place dictators and mass murderers, drug and people traffickers and sought to assassinate opponents. International community, are you going to stand for this? That the perpetrators of war, murder, state terrorism and most of all lies and slander are accusing someone of crimes they are guilty of?