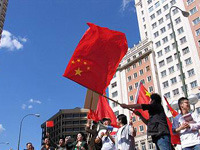 Last week, Chinese security forces stopped another "internet revolution" before it had a chance to start. According to the "Egyptian scenario," the Chinese Internet was filled with calls to go out on the massive demonstrations of protest against the authoritarian regime and begin "Jasmine Revolution" demanding "democracy, food, housing and justice".

According to the Chinese side, anti-government appeals have been circulated on the Internet from U.S. IP addresses. In contrast to the authorities of the Arab countries, Chinese leaders reacted with a speed of lightning: the access to the World Wide Web in the country has been blocked and the venue of the rally was cordoned off by police and army.

However, this proved unnecessary. Although the organizers of the rally counted on the fact that it will be joined by thousands of Chinese since the rally was staged on a busy pedestrian street of Wangfujing in the center of the capital, almost none of the capital's residents supported it. From the entire China with a population of 1.3 billion people, only a hundred of suburbanites came to support the revolution in Beijing and were dispersed by police in seconds.

The opposition tried to hold a parallel protest in Tiananmen Square. However, due to the small number of democracy supporters authorities did not have to resort to a repetition of the events 20 years ago. The security officials quickly dispersed the demonstrators. As a result, "Jasmine Revolution" has perished without being started.

Meanwhile, the Chinese leadership did not think that the events were tragic, because Wangfujing street is traditionally a place where those disgruntled get together at the end of February. They gather to assert their claims to the authorities on the eve of the beginning of the next session of the All-China People's Representatives. Every time these rallies are quickly and effortlessly suppressed by the police.

Why so few people join the protests? It could be explained by the fact that the Chinese people are thriving and are entirely supportive of their government. However, when assessing China, we should not confuse economic performance indicators with lives of ordinary people.

After all, what is the basis of the Chinese "economic miracle?" China has indeed become the second economy in the world and is ready to fight for the first place. But how did the country that recently was not seriously considered by anyone has managed to make such a fast leap forward?

Over the last decade, the standard of living of the Chinese people has increased markedly (as evidenced by the presence of a huge number of cars), but not enough to compare with those of South Korea and especially Japan.

A salary of $200 per month for hard labor is the reality for many Chinese. Those who get more are considered lucky. Yet, it is the low labor costs, and consequently, low cost of product that provides the competitiveness of the Chinese goods in world markets.

Are ordinary Chinese fed up with this life? As we can see, they are not. In the vast China there are virtually none of those willing to rebel. It is not only that the Chinese Communists may refresh the memory of the events in Tiananmen Square if need be.

What is easily possible in the Arab East is virtually impossible in the Far East. Although the Chinese have accumulated vast experience of uprisings against the authorities, in the minds of the people educated in Confucian ethics the cult of work and discipline is still dominant.

But maybe the thing that the Americans were not able to do now is possible in the future? Deputy Director of the Institute for Far Eastern Studies Sergei Luzyanin answered this question in an interview with Pravda.ru.

"Of course, alarmed by a sudden and unexpectedly rapid growth of China, the West is trying to counteract this, trying to destabilize the situation. They are using the latest inventions like the calls for a revolution in the internet.

However, so far all the appeals were in vain. Of course, China has many challenges, including the existing separation between the rich and the poor, but the Chinese people feel that the reforms started 30 years ago are yielding their fruit. During this time, the standard of living has increased significantly. Nobody in the country is dying from starvation, and those who used to be poor got their "cup of rice." The situation continues to improve year after year.

As for the fact that the West wonders how people can live under these conditions, it should be remembered that the criteria of life are different everywhere. For Russia and the West the salary of 200 dollars is nothing. In China, where the prices for food and many other expense items are much lower, it suffices. This includes big cities, not to mention the village.

This money is enough to live on and even save. In this case we are talking about the lives of ordinary Chinese. As for intellectuals, they live much better than in Russia. The average Chinese person engaged in the intellectual sphere is paid two and sometimes three times more than her Russian counterpart.

Take the Chinese authorities, for example. There is no such stagnation as in the Arab world, where the same person rules for decades. Within four to eight years the country's leadership is renewed, and money in China is concentrated in the hands of one person.

China has a clear leadership development course, and this is reflected in better household incomes. The question is why the Chinese would revolt against the power which increases their standard of living?"