Clash of generations or manipulation of the media?

There can be no doubt that something is happening across the Middle East as a discontented youth rises up to claim a greater distribution of wealth and speak out against corruption, in favour of jobs and a future. Yet in the absence of real-time credible sources of information, is the Mainstream (bought) Media selling us its own version of events? 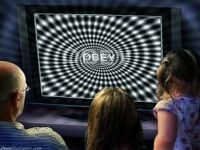 What happens next in the Middle East is anyone's guess. What is happening now is visibly a clash of generations, People Power generated by years of corruption and bad governance orchestrated by campaigns both online and in real life, or is it? While the regimes in the Middle East try to control the media, those outside the region decide what we are being shown.

Experience indicates that the full truth lies somewhere in the middle and that amid the chaos that seems to be unfolding in Libya and Bahrain, after what has happened in Tunisia, Egypt, Jordan, Djibouti and Yemen, comes also a tendency for hysteria to present itself as news, for false claims to pass as the truth, providing a wealth of tinder for those who control the media to burn, fuelling the flames that make and sell a good story...and copies.

For instance, the main story coming out of Libya is the alleged massacre of protesters in Benghazi, yet where is the information about the massive rally in Al-Jufra in favour of Colonel Muamar Al-Gathafi, on the supposed "Day of Rage"? And how is it possible that a mainstream media outlet published a claim from a spokesperson of the Moslem Brotherhood in Egypt, stating that the wave of popular unrest was due mainly to fury against Israel?

The collective heritage from election campaigns around the world has proven the veracity of Bill Clinton's words: "It's the economy, stupid!" Foreign policy matters not when people have access to information, which shows them that their standard of living is far lower than their peers in other countries, and see practices of despotic bad governance siphon off their nations' wealth, leaving a future with little or no hope for the next generation.

However repulsive the foreign policy of Israel and its treatment of Arabs may have been, and continues to be (phosphorous bomb attacks against a school in Gaza for instance), it appears that nothing could be further back in the mindset of the protesters on the streets today. The buzzwords coming out of the area are jobs and housing, dynasties and corruption.

Amid the mis- and dis-information campaigns and the sheer absence of balanced and credible sources, certain conclusions can however be drawn. First, the means of mass communication has enabled people to be informed, to form their own opinions and to communicate both internally, organizing their rallies and externally, passing the message to the outside world despite clampdowns.

Secondly, the accumulation of wealth by the ruling cliques in these countries has turned the people against them. Corruption and bad governance are impossible to hide and are unjustifiable.

Thirdly, the heavy-handed way in which the security forces have been deployed demonstrates a tangible loss of touch with reality. The day before he was forced out of office, President Hosni Mubarak was speaking of "punishing" those responsible for the unrest.

That said, although we are speaking of a single geographical region, we are also speaking of different social and political realities which may be glossed over in the temptation to present these countries and peoples as a single unit. Colonel Muammar Gathafi's social and welfare programmes in Libya, for instance, are far greater than those implemented in neighbouring countries.

Modern infrastructures have sprung up in recent years which aim to attract investment and bring added wealth and sustainable development to the citizens of Libya; Gathafi's literacy programme has seen universal education become reality and since he took power in 1969, the life expectancy of Libyan citizens has risen by twenty years while infant mortality has decreased sharply.

Gathafi represents the control of Libya's resources by Libyans and for Libyans; literacy reached ten per cent of the population when he came to power. Today it is around 90 per cent. Women, today, have rights and can go to school and get a job. The standard of living is around 100 times greater than it was under the rule of King Idris I.

Whether that is enough for the Libyan people, only they can decide and what is unclear at the moment, in Libya at least, is how much of the unrest is concentrated in Benghazi, and for what reasons, who the protesters are and who or what is behind them. One thing is certain: Benghazi is the story we are being sold today.

Should this be true in whichever case, such excessive use of force cannot be taken in any other way in today's world than a gross mistake and a very serious error of judgement which could seal the fate of Colonel Gathafi's period of governance, which was not all bad for Libya's citizens, unlike other despotic rulers in the region who have given back much less.

Whatever happens, the worst thing that could emerge would be for extremists to step into the void and hijack the popular movements to press their own agenda. If recent history has taught us anything, then the bottom line is that extremism does not create jobs, it destroys lives...and we are speaking of a region in which Osama Bin Laden is more popular on the streets than all the leaders put together.