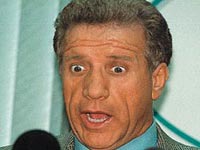 Head of the Mabetex Group Behgjet Pacolli may become the new President of the Albanian Kosovo. His name became known in Russia due to the scandal surrounding the restoration of the Kremlin in the 1990s. It is not ruled out that he was involved in other dubious deals concerning international politics at large.

Late in the evening on Monday Kosovo Albanian media reported that the head of the party "Alliance for a New Kosovo" Pacolli agreed to join the coalition with the Democratic Party of Kosovo Prime Minister Hashim Thaci. In exchange for the formation of the parliamentary majority and the preservation of his post of the Prime Minister, Thaci offered Pacolli the presidency.

This measure was largely forced. The Parliamentary Assembly of the Council of Europe (PACE) prepared a report on the involvement of Thaci in the trade of body organs of the Serbs captured by Albanian militants. After that Kosovo parties, one after another, refused to form a coalition with the Democratic Party. The only party that agreed to do it was the Alliance for a New Kosovo that took fifth place in the recent elections.

"The coalition agreement will be formalized shortly. KDP leadership has announced that it has renounced claims to the presidency of Kosovo, paving the way for Behgjet Pacolli to take this position," said one of Thaci's supporters to Kosovo- Albanian television. Most likely, there will be no problems with the election of Pacolli. The President of Kosovo is elected by the parliament, and the two parties of the future ruling coalition have 65 out of 120 seats.

If the information about the agreement between the two politicians is confirmed, the authorities in Kosovo will form one of the most scandalous tandems in history. Former prosecutor of the Hague Tribunal Carla Del Ponte wrote about the "exploits" of the former leader of the Kosovo Liberation Army (KLA) Thaci. This included his involvement in drug trafficking and organs trafficking. Incidentally, she most likely has the same amount of information on Pacolli. He is not as odious as Thaci, but he was also involved in a fair amount of scandals.

Behgjet Pacolli was born in 1953 in Kosovo, but in early childhood he moved to Switzerland with his parents. He started his business in 1986, and along with his companion registered his firm Interplastica in Lugano. Even back then Pacolli made a bet on the development of relations with Russia. His company was responsible for the supply of goods to the USSR, and had several Russian construction contracts.

The candidate for the presidency of Kosovo has repeatedly acknowledged that he held all his funds in Banca di Gottardo. This credit institution was involved in multiple scandals. In the1980s Switzerland and Italy conducted an investigation of the involvement of the bank in money laundering for the Italian Mafia. Nevertheless, in 1989 Pacolli went to this bank for a loan to purchase goods for subsequent delivery to the USSR.

What happened next is still the subject of an investigation by Swiss and Russian law enforcement agencies. Interplastica filed for bankruptcy, but Pacolli did not become less wealthy. In the early 1990's he founded Mabetex Group and became a co-owner of a dozen of companies. The main focus of his work became cooperation with Russia. The entrepreneur even mastered the Russian language.

In 1993 Mabetex signed an agreement with Russia first for the repairs of the White House that suffered from tank shelling, and then the reconstruction of the first building of the Kremlin, the building of the State Duma and Federation Council. Law enforcement agencies of Russia and Switzerland suspect that he obtained the lucrative contracts in Russia through bribes at the astronomical amount of $450 million. He denies all charges, but does not deny the fact that he helped the family of Boris Yeltsin to obtain credit cards of Banca di Gottardo.

In the past ten years Pacolli has not been working in Russia, but the investigation of his activities related to the restoration of the Kremlin in the 1990s is still ongoing. Through this case Russia has learned another name - Carla Del Ponte. When Pacolli was making deals in Russia, she served as a federal prosecutor in Switzerland. Then she became the prosecutor of the Hague Tribunal. It is possible that she could have seen his name in certain documents.

In 2007, a number of European media outlets, with reference to the German intelligence service BND, said that Pacolli may be associated with the Kosovo-Albanian mafia. According to some reports, he transferred 40 million euros to the accounts of the former UN special envoy for the Balkans Martti Ahtisaari. It is not ruled out that on the instructions of the Albanian mafia (possibly Hashim Thaci) Pacolli, in addition to lobbying for the independence of Kosovo also supplied prostitutes to Ahtisaari.

What else is Behgjet Pacolli known for? Why has Thaci chosen him? Artem Ulunyan, head of the Balkan, Caucasian and Central Asian Studies of the Institute of the World History shared his thoughts in an interview with Pravda.ru:

"The situation in Kosovo is very complicated and confusing. Recently, the focus is riveted to the events questionable from the standpoint of the law. Yet, this situation should be discussed beyond the context of the Penal Code. This also concerns Behgjet Pacolli who will unlikely be charged with any crimes.

The political life in Kosovo is turbulent these days. Previously, local Albanian leaders had the united front, striving to ensure the recognition of Kosovo's independence. Today, when Kosovo is recognized by over 70 countries (and almost the entire West), the issue is already different. The leaders have different parties, different agendas, and different goals. Thaci was unable to negotiate with other politicians and appealed to Pacolli.

The candidate for the presidency in Kosovo is a very complicated person, and his appearance on Kosovo's political horizon is not related to the scandals his name is associated with. Pacolli, who has lived almost his entire life in Switzerland, has extensive contacts with the Albanian emigration, its different areas and sectors. He knows Albanians businessmen and public figures who play certain roles in the policy of the EU and U.S.

It is fundamentally important that Pacolli has good connections in Russia and Eastern Europe. The calculation of Thaci is based on the fact that Moscow, which is not going to recognize Kosovo's independence, will still maintain a dialogue with such a well-known person. So, offering Pacolli for the president, Prime Minister Thaci has assumed more political commitment."