Egypt and attackers for hire 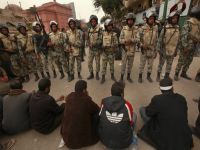 While the savage assault on demonstrators protesting against the regime of Mubarak in Cairo and other Egyptian cities is getting worse, now with the use of firearms, it is necessary to call attention to two items of false information circulating about the situation in Egypt. The first, the truth makes its way slowly into the "Western" media, but it will not be overemphasized. The second, the sad truth is breaking through to the Egyptian people, but not in the foreign press.

Circumstances are not producing a civil war within Egyptian society, but an organized aggression by the regime against a sector of the overwhelming majority of society. The attacks have been organized by the Mubarak regime, mobilising the entire apparatus of the secret police and ruling party leaders who have in turn mobilised thousands of thugs (baltagiyya), most of them recruited from the 17,000 common prisoners released from Egyptian prisons.

This is a procedure that the Egyptians know very well, and has been used extensively, for example, in all electoral processes. Beyond the identity of the police officers seized by the demonstrators, and what the Al-Jazeera cameras show, this has been confirmed by Mustafa al-Fiqi, known businessman and member of the Politburo of the ruling National Democratic Party.

Al-Fiqi said to Al-Jazeera that he knows with all certainty that some big businessmen members of the party have recruited thousands of people to come to attack the demonstrators, and he has not ruled out that the Interior Minister has knowledge of it. Al-Fiqi has not given names.

Amin Iskandar, president of the not legally recognized Karama party, gave them (Al-Jazeera, 03/02/2011) the following names: Ibrahim Kamel, also a member of the Politburo, real estate magnate and friend of Gamal Mubarak (who announced support declarations for Mubarak before the events occurred), Murshidi Muhammad, member of his party, Safwat al-Sharif, Minister of Information for two decades and Secretary General of the Party (the second man after Mubarak on it), Zakariyya Azmi, chief of Mubarak also for decades. His sources: "Bona fide people of good faith in general, and the attackers, reduced and stopped by the protesters.

Interestingly, al-Fiqi said that Mubarak is not involved in the initiative of aggression. The Prime Minister, Ahmad Shafiq, in a press conference, said they do not know if the attackers, according to him only one part of Mubarak supporters might respond to an organized activity or not, might be mercenaries or not, that everything would be investigated, but the forces that he and Mubarak still direct, including the military, have done nothing to stop the aggression.

Many of the regime's latest moves point to the search for Turkish heads. Al-Jazeera is reporting this morning that the Attorney General, the same as before the intifada, has ordered that several members of the ruling party be prevented from traveling outside Egypt, the interior minister who was ousted a few days ago, al-Habib Adli, and several other "ministers."

What the government has done is force Vodafone, as the company has communicated to al-Jazeera, to broadcast messages of support for Mubarak. Again according to the source, "safety guidelines" were passed calling for foreign journalists leave the hotels near Tahrir Square ... now the same media sources claim that the "thugs" burst into the hotels near the square Tahrir.

2. The neutrality of the army.

The army not only has not defended the protesters, but it is not being neutral. While we cannot rule out that the situation will change, and sometimes news and pictures have appeared scattered in this direction, "the army has failed to protect the people as promised. The Egyptian army has about 500,000 men, and modern weapons of all kinds. They could well have defended the Tahrir protesters if their commanders had proposed it.

Moreover, as pointed out by some demonstrators to Al-Jazeera, in the days preceding the attack, those who were going to Tahrir Square only gained access after undergoing a severe personal frisking. However, when that system began, armed aggressors gained access to the square without major problems, in particular where the Egyptian Museum is located, where the "headquarters" of the army is in that square. It is precisely this point of access only that protesters against the regime have not been able to secure and fortify at any time throughout the day.

The confidence of the Egyptian people is on the one hand a historical trust, based on their role in the establishment of the republic (and the expulsion of a foreign king), and achieving the effective independence and sovereignty of Egypt between 1952 and 1956. Also in other later attitudes as the refusal to suppress "the revolt of the bread" in 1977 when Sadat did not withdraw the economic measures that had provoked it.

But the historic prestige of the army is accompanied by the fact that it burst onto the streets of the big cities, at the same time the police disappeared, saying they are not appreciative, do not protect the people and many protesters forget that high commanders and army officers are part of the system. They developed their careers in their privileged living conditions, and they have not known other officers of similar rank of the state, and much less the general population.

Not only have they enjoyed residential, education and health advantages, but the army has an industrial sector that not only focuses on the manufacture of weapons, but all types of products. Egypt has been, over the past decades, a manufacturer and exporter of weapons, and for more than 30 years, has received timely U.S. military aid (1,3 billion) which is the second largest in the world after Israel receives, and one of its main sources of income.

This aid has been invested in the whole military-industrial complex, in addition to the power of the U.S. military industrial complex, in maintaining the repressive apparatus and for the comfort of the officers of the armed forces. So from the beginning, the protests have received special attention and speculation of the U.S. government with the possibility that the U.S. might withdraw its military aid to Egypt, but without those going so far as to confirm this possibility.

Do not forget that on Wednesday the 26th, while the second day of protests was developing, the Chief of Staff, Sami Anan, went to Washington, at the head of a delegation of senior officers for "pre-arranged" talks. On the 28th, the Al-Jazeera reported, quoting the Israeli secret service, that the defense minister, Mohammad Hossein al-Tantawi, had also arrived in Washington.

If the Egyptian army fails to defend its people and, today, in the next few hours in a decisive way, it will be cost them more as the Egyptian people will not give any political role in the case a solution is negotiated as the way out of this situation. As indicated from Cairo by Egyptian researcher, Hossam Tamam, a scholar in particular of the Muslim Brotherhood, this reality, in the form of disappointment, began to prevail in the minds and hearts of the Egyptians.