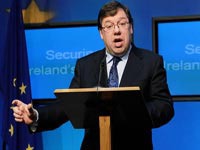 Brian Cowen, the Prime Minister of Ireland, seriously affected by the crisis, decided to leave politics. This is his price to pay for his inability to cope with the economic troubles, as well as his bizarre actions.

Cowen had been clearly preparing for retirement. Back in mid-January, he resigned as the leader of the ruling party Fianna Fail. Now, however, he resigned as the Prime Minister and decided to quit politics. In his farewell speech Cowen said that he held the highest office in the country during the most difficult stage in its history over the past eighty years.

It is expected that it will be announced that parliamentary elections will be held on February 25. Cowen's supporters have virtually no chances to win the election. According to the polls, Fianna Fail enjoys the support of only 16 percent of voters, while the competitors from the Fine Gael and Labour Party have 33 and 23 percent, respectively. Such a significant drop of the rating of the party is explained by the fact that Cowen was in power at the wrong time, at the wrong place.

This politician came to power in May of 2008. By this time the Irish economy was the fastest growing in Europe. It was increasing by nine percent a year. Since the mid-1990s, the country had been experiencing an investment boom. But as soon as Cowen became head of the government, the global crisis broke out. It is unlikely that he is to blame for what had happened in Ireland. Yet, it was him who had to deal with mistakes made by his predecessors.

The downside of the investment boom was the fact that a significant part of the Irish economy fell into the hands of foreigners. The country has never developed its own powerful high-tech production, and foreign investment alone was not enough. The enormous flow of money started to leave the country, and as a result a threat of default was looming in Ireland at the turn of 2008-2009.

Before the crisis, Ireland, whose population does not even reach four million, attracted hundreds of thousands of migrant workers from Eastern Europe, especially Lithuania and Latvia. Now tens of thousands of its citizens are unemployed, and the Baltic guest workers had to return home. Something had to be done with mortgages as well, since the sum of all mortgage loans in the country was 11 times higher than its GDP.

In 2008 alone, real estate prices in the country fell by 37 percent. Further decline could be postponed, but in the last year the fall still amounted to ten percent. The government had to urgently buy real estate loans from banks at the amount of 90 billion euros.

The budget deficit in 2009 amounted to 9.5 percent - a record for Western Europe, which a year later was surpassed only by Greece. In search of salvation, Prime Minister Brian Cowen began to raise income taxes, as well as taxes for cigarettes and gasoline. For the sake of the economy he even has cut the number of members of the government in half. Nothing has helped. Irish wallets were getting lighter, and the rating of the cabinet was falling.

Like the Greeks, the Irish sought help from the EU. Here they were forced to make political concessions. In June of 2008, Ireland in a referendum rejected the EU's founding document - the Treaty of Lisbon. Intoxicated by the investment boom, the proud Celtics did not want Brussels to dictate their terms. Yet, the crisis has changed everything. In a referendum in the fall of 2009, the Lisbon Treaty was approved. The Irish had to swallow their national pride.

In 2010, the focus of Europe shifted to Greece. However, the situation remained grave in Ireland, and the budget deficit has climbed to double digits. Prime Minister Cowen has long said that his country would not have to appeal to the European Union and the International Monetary Fund (IMF) for financial assistance. Yet, in November it had to be done. Ireland received 85 billion euro bailout, but under strict conditions.

The Celts had to agree to reduce the budget deficit by approximately $15 billion and raise taxes. According to the rules of the euro area, the budget deficit cannot exceed three percent. It is expected that this number will be achieved by 2014.

There were enough reasons for the drop of Cowen's ratings. His inability to cope with the crisis and the inability to resist the adoption of the Lisbon Treaty that causes the rejection of many Irish people is enough for retirement, especially considering that he did not have any notable successes. However, the Prime Minister has managed to further stain his reputation.

Last fall, after a sumptuous reception given by his party members, Cowen had a radio interview. His speech was slurred, and the listeners could not understand the meaning of the words spoken. The rumors immediately emerged in the country that the Prime Minister was very drunk. "He was in some intermediate state between intoxication and hangover and he was absolutely indifferent." commented a representative of the local opposition.

Cowen denied the allegations. However, an investigation was started within the party. As a result, Cowen retired from his position as the head of Fianna Fail, but now he is quitting as the Prime Minister. The story of Brian Cowen may become one of the most unfortunate not only in Irish history, but also in the history of the entire European Union.

Something strange has been happening in the land of the proud Celtic.